Written by Tom Deehan on Feb 13, 2017. Posted in On Location / Production News

Filming has begun on Marvel’s upcoming TV series, Cloak and Dagger, with principal photography taking place in New Orleans. The new series will be the first collaboration between Marvel and Freeform (previously ABC Family), subsequently targeted at a young teenage audience.

The shoot will last for 86 days and will invest roughly USD11.2 million into the state, out of an overall budget of USD42 million. 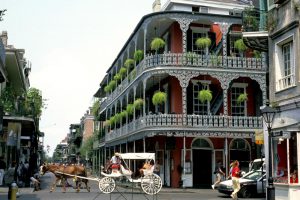 Joe Pokanski (Heroes) will act as the series showrunner, with Alan Fine, Stan Lee, Jeph Loeb and Joe Quesada on board as Executive Producers.

Governor John Bel Edwards explains: “it is my honour to welcome Marvel and its production team to our great state. Since 2002, Louisiana has been the location destination for more than USD6 billion in film and TV production. Disney’s continuation of a long relationship with Louisiana and our crews, soundstages and locations comes as great news for the television industry professionals who work here, and for our resourceful vendors who supply and equip film and TV productions so well.”

Secretary for Louisiana Economic Development (LED), Don Pierson adds: “Louisiana’s incentive program, our crew base, infrastructure, locations and film-ready communities are exceptional assets available to the television and film industry. We know Marvel had the ability to consider other locations, and due to their confidence in all the things we have to offer, they have wisely chosen Louisiana. LED will work hard to ensure that they continue to have a best-in-class production experience here in Louisiana. Our goal is to remain the state of choice for these projects.”

Louisiana’s production industry is now recovering after ex-Governor Bobby Jindal suspended buyouts of tax credits issued by the incentive, which led some Producers to believe that the programme had been scrapped entirely. The local Government resumed dealing in tax credits in July 2016.

Production is currently underway on three other Marvel projects, with Avengers: Infinity War in Georgia, Inhumans in Hawaii, and Black Panther in South Korea.