Filming has begun on a short sequel to Richard Curtis’s 2003 ensemble comedy, Love Actually. The first day of principal photography took place along London’s South Bank yesterday, as the project returned to an iconic location that was featured in the original film.

FilmFixer, whose recent credits include work on Denial and Apple Tree Yard, are providing on location services for the shoot. 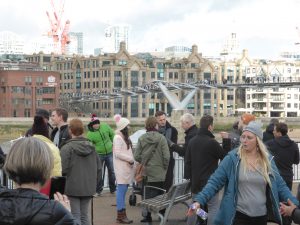 FilmFixer Director, Andrew Pavord explains: “we took the call just the day before, in the afternoon, when the planned location fell through. Despite the last minute notice, the shoot was no secret and drew a huge crowd - many of whom were wearing their red noses. It was just a brilliant atmosphere - everyone was so good natured, the weather held out, and the shots look brilliant. We encourage everyone to remember that this is all about raising money for important charities. Please give generously for Red Nose Day, hosted by the BBC on Friday March 24th.”

Entitled Red Nose Day Actually, the 10-minute short film with see the return of Liam Neeson, Hugh Grant and Keira Knightley amongst others, to roles they first portrayed almost fourteen years ago.

He continues: “Liam Neeson had flown in especially just for the day's shoot - returning to the US the very next day - so it was vital that the permitting was sorted, despite the last minute problems. Remember this is all for charity - everyone has to pull together for this great cause. We reduced the fee to film there for the day accordingly. The location was booked all day, and the shoot ran from 10:30 to 3:30.”

With the South Bank shoot now complete, the production is expected to revisit a number of locations from Love Actually, which could include Canary Wharf and Selfridges on Oxford Street.

Films of any budget can access a 25% tax rebate upon filming in the UK, with the requirement that at least 10% of the budget is spent locally. The rebate also extends to high-end television shows, wherein a minimum spend of GBP1 million per broadcast hour is met.