Written by Tom Deehan on Feb 8, 2017. Posted in On Location / Production News

The Current War, a biographical film about the business rivalry between Thomas Edison and George Westinghouse, was on location at the Pavilion Gardens in Brighton over the weekend. The iconic Royal Pavilion, which was erected in 1787, was used as a double for the 1893 Chicago World Fair.

As pioneers of the initial marketing and distribution of electricity, Edison (Benedict Cumberbatch) and Westinghouse (Michael Shannon) both sought to dominate the market and oust the other from it. 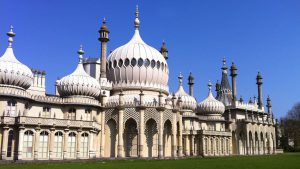 The film also stars Tom Holland, Nicholas Hoult, Katherine Waterson and Tuppence Middleton. Prior to the Brighton shoot, a number of scenes were shot in Essex’s Waltham Abbey and Northumberland.

Detailing the shoot to Brighton & Hove News, Executive Producer Ann Ruark said: “this week production on upcoming film The Current War has come to Brighton. The Royal Pavilion has given us the ideal setting to recreate the 1893 Chicago World Fair, where Thomas Edison and George Westinghouse battled for who would provide electricity across the land.”

Alan Robins, Chair of Brighton and Hove City Council’s economic development committee, adds: “we’re pleased to welcome the filming team for The Current War to the Royal Pavilion this week and look forward to seeing the upcoming film when it’s released. Brighton and Hove is a fantastic location and has been the setting for many film and television shows. We’re always keen to explore opportunities to showcase the city to audiences around the world in this way.

Brighton sees a moderate amount of production activity each year, having recently hosted filming on the ITV crime drama, The Level. Feature films that shoot in the UK can receive a 25% tax rebate if 10% of the overall budget is spent locally during production.