Written by Tom Deehan on Feb 28, 2017. Posted in General Interest

A new screen initiative, entitled Straight out of the Straits, has been launched to provide opportunities for local creatives to work in production. The initiative is a joint effort between Screen Queensland, Screen Australia and ABC iView.

Successful applicants will attend a workshop hosted by filmmaker David Batty (Black As - pictured) with the intention of developing a non-fiction series for ABC iView. The applicants will also contribute to production on ABC’s new historical series, Blue Water Empire, which began filming on location in Far North Queensland last year. 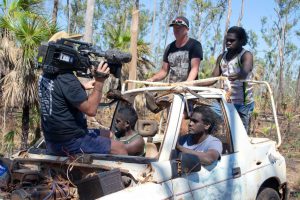 Premier and Arts Minister Annastacia Palaszczuk explains: “it is crucial to develop Queensland’s screen industry at every level. Straight out of the Straits is a great opportunity for early career practitioners to gain valuable experience and new skills to help grow the state’s screen industry.”

Screen Queensland CEO Tracey Vieira adds: “Straight out of the Straits is a first in giving Torres Strait Islander screen practitioners the opportunity to author and craft their own community stories for the national broadcaster’s digital platform. It reflects Screen Queensland’s commitment to giving a voice to authentic Aboriginal and Torres Strait Islander stories and storytellers, and our faith in diverse talent that makes up our state."

Australia employs a tax rebate of up to 40% for local projects, designed to stimulate the domestic production industry. A rebate of 16.5% is also available for high-budget international projects that spend a minimum of AUD15 million in the country.