Robert De Niro’s next project, The War with Grandpa, has shifted production away from Toronto, instead opting to film on location in Atlanta. While no official reason was provided to explain the sudden change in location, the Hollywood Reporter notes that a Toronto Studio Operator cites an “attractive offer” for having lured the project to Georgia.

Ontario offers a 35% tax credit to productions that incur at least 75% of their overall expenditure within the province. Georgia on the other hand provides transferable tax credits of up to 30% on a minimum expenditure of USD500,000, with no cap on the amount that can be claimed. 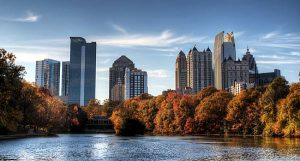 An appealing aspect of Georgia’s incentive is its coverage of actor salaries, which can often be the most costly expenditure of any production.

The change could be attributed to the falling value of the Canadian dollar, having dropped by 2% last week against an emboldened US dollar. Alternatively, the highly competitive nature of Georgia’s incentive programme has allowed the state to entice projects away from other production hubs, such as California and Louisiana, for years.

The news comes only days after a report that indicated a 49% increase of foreign productions shooting in Toronto. The surge took place throughout 2016 as the city hosted a variety of high-profile shoots including Star Trek: Discovery and NBC’s Taken.

The War with Grandpa is being produced by Marro Films, with Dimension Films handling the distribution. Robert De Niro will star alongside Uma Thurman and Christopher Walken. The film is currently scheduled for an October 2017 release date.