Written by Tom Deehan on Mar 14, 2017. Posted in On Location / Production News

Christopher Menaul’s war-time film, Another Mother’s Son, recreated St Helier Harbour at Princes Wharf in Bristol. During the shoot, the production utilised the Lloyds Amphitheatre as a base of operations.

Principal photography took place throughout November and December 2015, with additional scenes filmed at Wells Market in Somerset, and Parade Gardens in Bath. 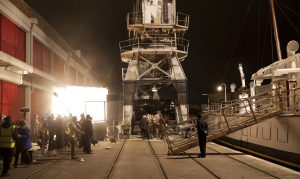 Laura Pye, Head of Culture for Bristol City Council states: “Bristol Harbour is one of Britain’s most beautiful and historic ports and it’s fantastic to see it serve as a backdrop in one of the largest scenes in Another Mother’s Son. It further cements Bristol’s strong reputation for film and TV production and I look forward to seeing the iconic Bristol landmark on the silver screen.”

A spokesperson for the film adds: "we had a great day shooting outside the M Shed at Princes Wharf during production. When we first set out to make this film, one of our main challenges was sourcing a sizeable 1940's steam ship onto which our Jersey deportees would be loaded. The quayside by the Balmoral was ideal for our film. The period cranes, the other barges and the great support of the Bristol Film Office and the Harbour Master helped us to achieve fantastic production value for one of our film's biggest scenes."

Areas such as Bristol and Bath require little effort to depict period settings thanks to a plethora of historical architecture that can even double for locations outside of the United Kingdom.

A 25% tax rebate can be obtained in the UK when feature films spend at least 10% of their overall budget in the country. The incentive programme has propelled the UK to become one of the world’s leading production hubs, attracting major projects such as Avengers: Infinity War and Mary Poppins Returns.

Another Mother's Son will be be released March 24th in cinemas nationwide.