Written by Tom Deehan on Mar 2, 2017. Posted in On Location / Production News

ITV’s prequel to the Prime Suspect television series was partially filmed inside Ladywell Coroners Court and Mortuary, an abandoned building situated in southeast London. The location was transformed into a functioning mortuary during production.

Commenting on the building, Andrew Pavord of FilmFixer states: “it’s a great location; a red brick Grade II listed building built in 1894. It’s still fully equipped with medical furniture and supplies. In fact the medical instruments already there were used, an actor was put in one of the real fridges (after it was deep cleaned), and 'bodies' were laid out on the original slabs. London still has brilliant locations like this tucked away.” 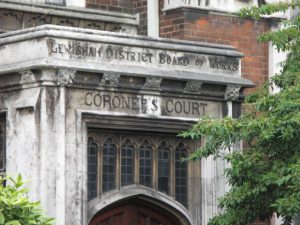 Pavord adds: “together with the production, we worked very closely with the Pullens Estate and Hampton Court Tenants and Residents Associations in Southwark and the Lambeth Estate Residents Association. Very generous donations were made to the groups to thank them. With their co-operation, these incredible scenes were possible.”

Interior scenes were filmed at Hampton Court Palace Hotel, while exterior shots include a bank robbery on Bagshot Street, and a chase scene at Penton Place in Kennington.

Newcomer Stefanie Martini will be stepping into the role of Jane Tennison, originally made popular by Dame Helen Mirren. Starring alongside Stefanie are Blake Harrison, Sam Reid, Alun Armstrong and Joshua Hill.

Television shows that incur a minimum spend of GBP1 million per broadcast hour while filming in the UK, are eligible to receive a 25% tax rebate. The rebate also extends to feature films that spend at least 10% of their budget within the country.