Written by Tom Deehan on Mar 17, 2017. Posted in On Location / Production News

The upcoming adaptation of Julian Barnes’s novel, The Sense of an Ending, shot several crucial scenes in the London borough of Lambeth, with principal photography lasting for seven weeks. Among the Lambeth locales, viewers will spot Newburn Street, Orsett Street and Sibella Road.

Vauxhall Garden Estate, previously featured in Sherlock and Sam Mendes’s Spectre, also makes an appearance. Jean Barker, Chair of the local Tenants Association explains: “the association is always interested in the content. Generally, residents don’t like scripts that involve shooting or drugs, although that doesn’t mean residents would always say no. They're just thinking of the affect that script might have on people who live here. Some irresponsible filmmakers can create a bad impression of the estate that doesn’t reflect who we really are and what we are really like.” 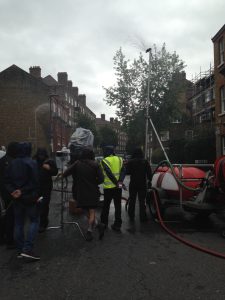 The production also ventured to other parts of London, including the Millennium Bridge, Highgate Station, Hornsey Lane and Crouch End Kitchen. The London portion of the shoot was done in collaboration with FilmFixer, who oversee filming in Lambeth, Southwark, Haringey, Camden and Islington.

Director Ritesh Batra details the experience of filming in the UK: “it took me a while to understand British reserve. I was used to being in Bombay, or New York or Mexico City, where people talk more directly. During pre-production, I would tell the crew, 'I would like you to do this,' and they would answer, 'that will be slightly difficult.' If it’s only slightly difficult, then let’s do it. I come back a week later and it’s not done. Well, it turns out that slightly difficult means that it’s impossible. Once you get to understand British reserve, it’s endearing.”

Scenes were also shot on location in Bristol. The southwestern city is a hub of production activity, thanks in part to its film-friendly nature and wealth of local production facilities. The film’s locations team was comprised of Marie Allcorn, Cornelius Morpeth, Karen Smith, Elena Vakirtzis and Adrienne Whitwell.

Feature films that are shot in the UK can receive a 25% tax rebate on their expenses. Productions must spend at least 10% of their budget locally to access the scheme.

The Sense of an Ending is being produced by Origin Pictures, BBC Films and FilmNation Entertainment. The film will be released April 14th in UK cinemas nationwide.