Written by Tom Deehan on Mar 6, 2017. Posted in General Interest

Ukraine-Canada co-production agreement in the works

The parameters for a co-production treaty between Canada and Ukraine are now being discussed following the release of Bitter Harvest, a collaborative project between the two countries. Produced by Devil’s Harvest Production, the film was shot in Kyiv and utilised sound stages at Pinewood Studios in London.

Detailing the agreement, Culture Minister of Ukraine, Yevhen Nyshchuk states: “in the wake of the impetus given by the film Bitter Harvest, we talked about preparations and signing of an agreement on joint film production. We have a preliminary agreement that our media companies will start the work with Canadian productions.” 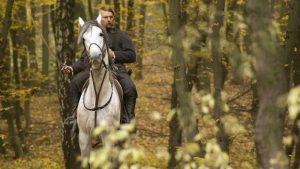 He continues: “in line with a standard procedure, the developing of an agreement lasts for about 18 months, but we hope it will be possible to speed up it.”

Co-productions treaties help to strip away any red tape that might otherwise obstruct collaborative projects between two different countries. An existing treaty between Ukraine and France allows international productions to assume the role of a domestic project while in the other country, providing access to local film funds.

As one of the world’s most profitable production hubs, Canada already has several co-production treaties in place with countries such as India, Hong Kong, South Africa and the United Kingdom.

The establishment of a similar agreement would provide a huge profile boost for Ukraine on the international market. The Eastern European country has already begun to expand its appeal with the development of a formal film incentive.

A 25% cash rebate incentive was expected to be in place by 2017 but delays in acquiring the necessary amount of signatures from the Ukrainian Government have resulted in the programme being redrafted for submission at a later date.