Written by Tom Deehan on May 26, 2017. Posted in On Location / Production News

The eagerly awaited revival of David Lynch’s Twin Peaks premiered on Sunday at the 2017 Cannes Film Festival, marking the Director’s first entry in the franchise since the 1992 feature film, Twin Peaks: Fire Walk with Me. 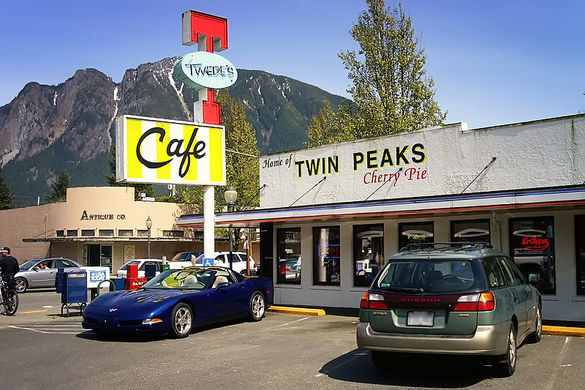 For the sake of continuity, David Lynch wanted to return to as many of the original locations as possible, which proved to be a challenge. For example, Twede’s Cafe in North Bend is recognisable to fans as the Double R Diner, but the location burned down in 2000 and was rebuilt with a different style.

The cafe’s new red, white and blue colour scheme needed to be changed to match that of the orange and brown scheme featured in the original series. The crew spent one week redressing the cafe as a result.

In addition to the original locations, the new series features a number of areas within California, including the Mojave Desert, Palmdale and Glendale. The show is co-produced by Rancho Rosa Partnership and Showtime Networks.

Twin Peaks follows the story of FBI Agent, Dale Cooper (Kyle MacLachlan) as he investigates the murder of Laura Palmer (Sheryl Lee) in a small American town. Since the show’s cancellation in 1991, Twin Peaks has achieved cult status worldwide.

The new series sees the majority of the original cast returning with some new additions including Naomi Watts, Jim Belushi, Laura Dern and Tim Roth.

The state of Washington employs a 35% rebate incentive to assist feature films, television series and commercials that incur a minimum spend of USD500,000, USD300,000 or USD150,000 respectively.