Written by Tom Deehan on Jul 14, 2017. Posted in On Location / Production News

After spending just ten minutes in Western Norway I was in awe of the possible filming locations. The Western Norway Film Commission and Truenorth Norway had invited location professionals Lori Balton (Downsizing), Alison Taylor (Straight Outta Compton) and Tom Howard (The Night Manager) to tour the country’s westernmost region to see what it had to offer. I was asked along to report back on what they saw. 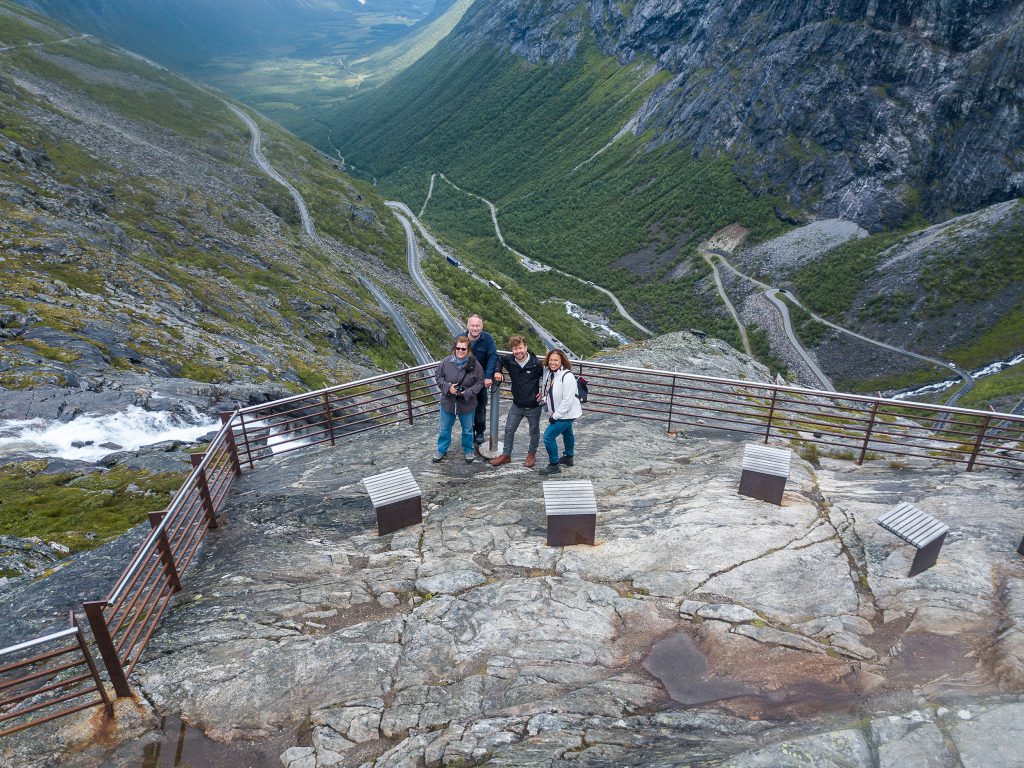 Almost immediately we were left wondering why the region wasn’t swarming with productions. The answer may lie in the fact that other nearby countries, such as the UK and Iceland, were quicker to appeal to the international filming community with studio facilities and financial incentives. This early move has come at a cost as the sheer volume of productions being shot in these countries has left Location Managers with very little originality to work with – which is exactly where Norway stands to profit.

It wasn’t until the release of a mid-budget science fiction feature that Norway was able to break out onto the international scene. Alex Garland’s Ex Machina used a combination of exterior shots at the Juvet Hotel in Alstad and interiors at a private residency nearby, but it is the former that held a lasting impact with its audience. The blend of futuristic architecture and unmarred wildlife created a sense of man-made isolation that complemented the film’s narrative. 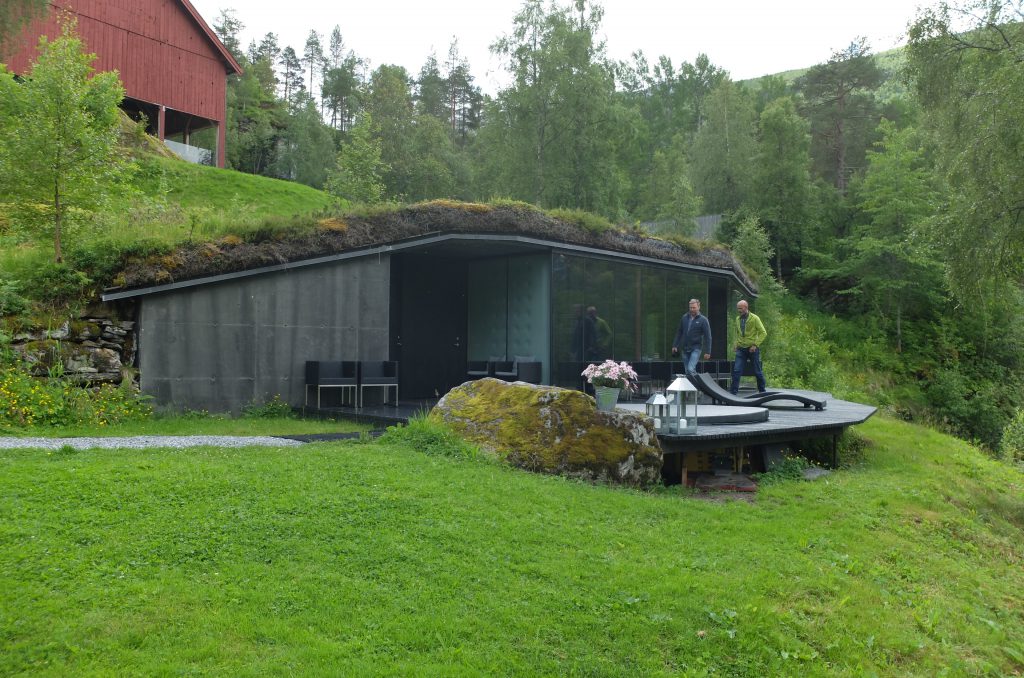 On a budget of USD15 million, Ex Machina was both a critical and commercial success, taking USD36 million at the box office. The film’s popularity has also had a great impact on local tourism – the Juvet Hotel is fully booked for every weekend this year – a fact that did not go unnoticed by Norway’s new, film-friendly Government.

The new administration sought to propel Norway’s production industry into the modern era by establishing a dedicated film incentive. In early 2016, a 25% cash rebate was made available to feature films, documentaries and television series that incur a minimum spend of NOK2 million (roughly USD239,000) within Norway. While initially prescribed an annual fund of NOK45 million, the cap was soon lifted after the popularity of the incentive was made apparent, rising to NOK56 million. 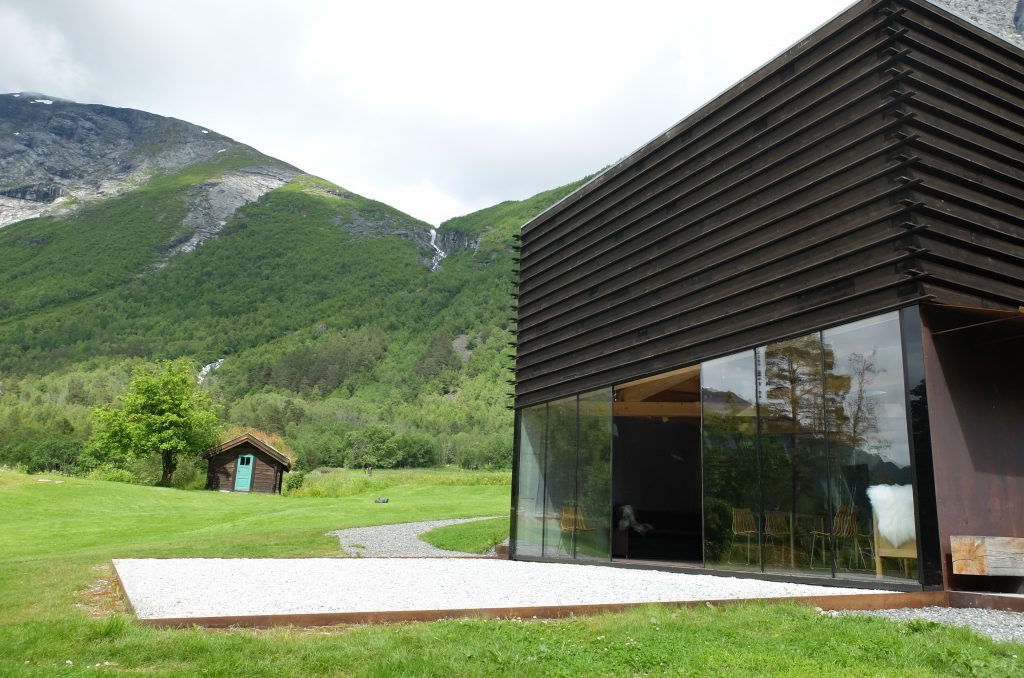 Later that same year, a regional fund specific to Western Norway was established under the name Zefyr. The fund is available only to domestic and co-production properties, so international Producers need to work with local creatives to tap into the fund. The programme operates on both a public and a private fund, to the tune of NOK10 million and NOK25 million respectively.

Norway’s cash rebate proved to be a huge success, attracting two major Hollywood productions: Alexander Payne’s Downsizing and Tomas Alfredson’s The Snowman. Both of these projects invested a total of USD24 million into the Norwegian economy, but with neither having been released they have yet to incur a major impact on Norway’s production profile, making this a fantastic opportunity to secure Norwegian locations before they become overbooked. 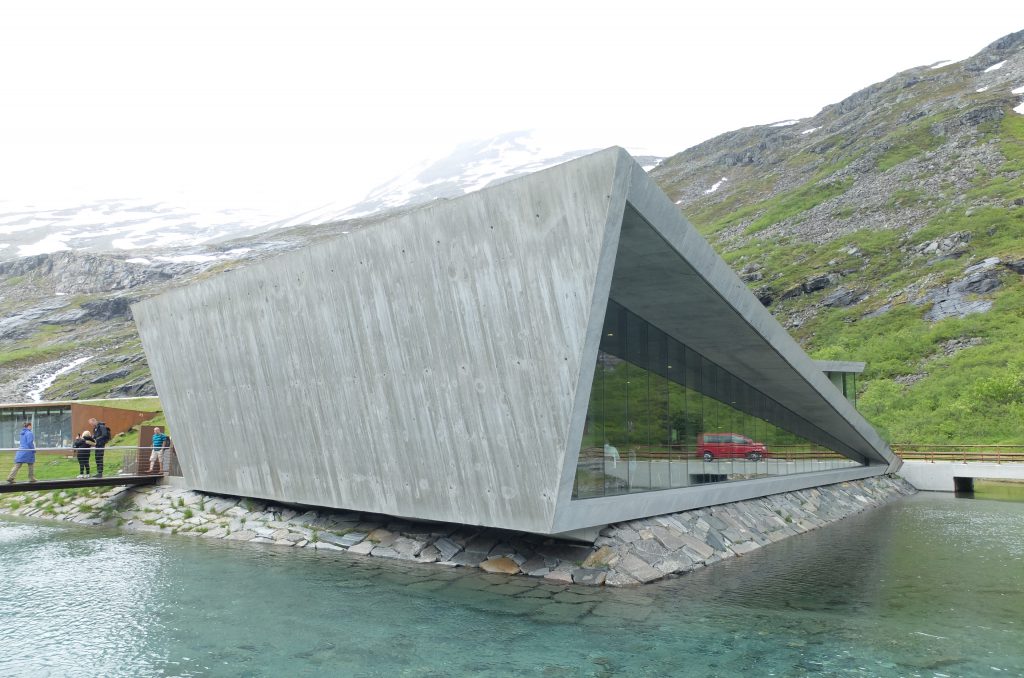 For those who want to capture the same unique aesthetic found in Ex Machina, rest assured that the fascinating blend of nature and modernity can be found in an abundance of locations, some of which have yet to even see a film crew. The Trollstigen Visitor Centre was one such location that immediately struck a chord with the rest of the group.

Tom Howard noted: “this type of location is Norway’s unique selling point - it's brutalist, ultra-modern architecture in a natural landscape which I don't think you can get anywhere else in the world.”

Alison Taylor added to Tom’s sentiments, explaining: “you have the nearby waterfall flowing underneath the building and out into this open pool with a walkway just above it… I thought that it was such a unique use of the space and very practical. To my knowledge, we don't really have anything like that back in the States.” 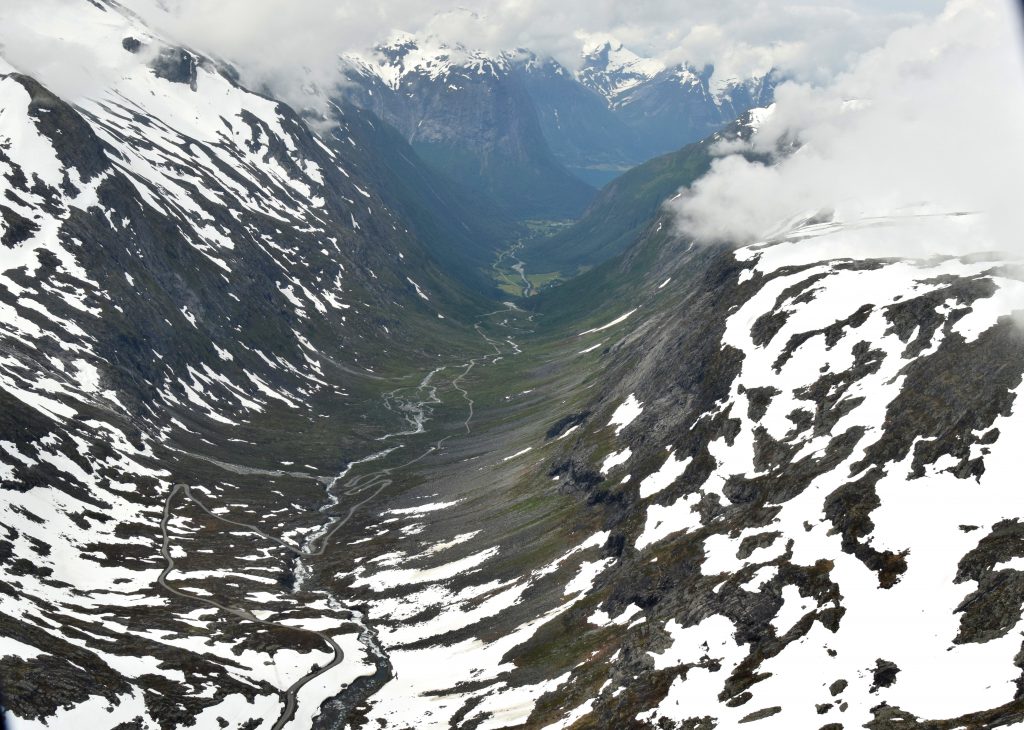 If the architecture was a pleasant surprise, it was because we had largely been led to Norway with one image in mind – the world-famous fjords. While you might have seen the fjords of Norway in post-cards and brochures, the scale of these towering glaciers can only be done justice through the medium of film. The saying goes that they are as deep as the mountains are high, which would explain why the fjords have a certain IMAX quality to them.

In fact, the otherworldly scale of the fjords certainly has a humorous side to it, best described by Tom Howard: “it's as if someone was asked to make mountains and lakes but went completely over the top and made the deepest lakes and the tallest mountains and are now showing off.”

A helicopter ride did nothing to dissuade this perception, as we soon realised that there was a whole other world atop the mountains just waiting to be discovered. As the green and blue palette of the valley disappeared beneath the clouds, an untouched canvas of snow presented itself in the middle of July! 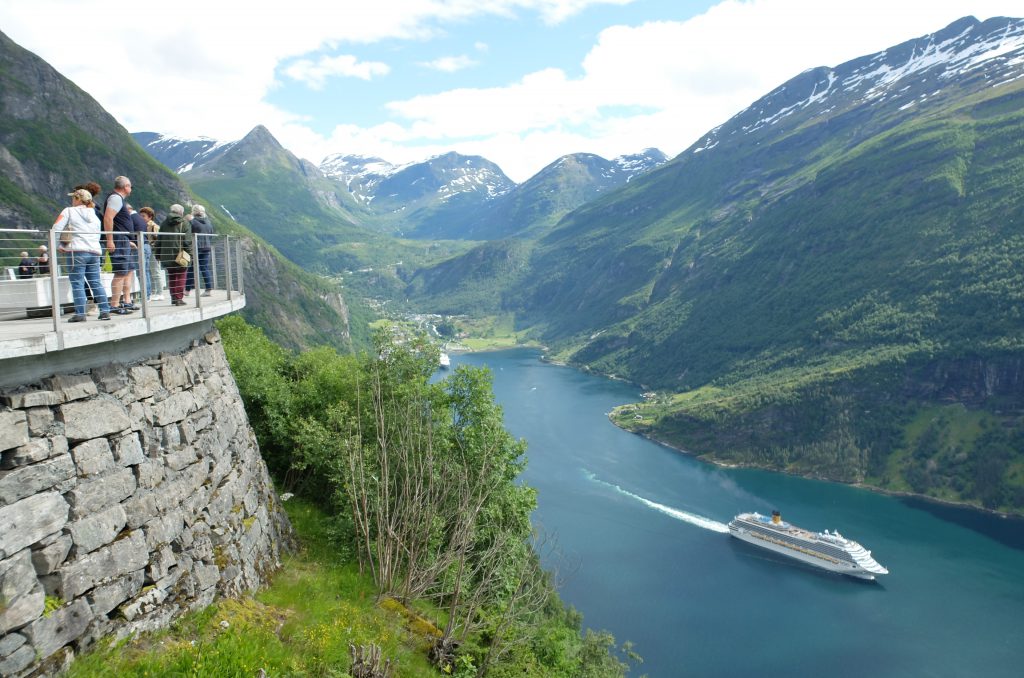 We were then informed that these areas could be accessed via specific routes that ascend the mountain, meaning that it’s perfectly plausible to transport a crew to the location by car, while the helicopter could be used to carry equipment.

Tom added: "the helicopter trip just exposed how amazingly beautiful the landscape is. I've never been over a glacier until now and it's incredible to see that even at this time of year you can still find snow. It's great to suggest that you can come here and find a winter wonderland in Europe at almost any time.”

For a more subdued landscape, Producers would do well to check out the city of Kristiansund and the surrounding area, which can be found further north. With its close proximity to the ocean and the iconic Atlantic Road, the area has found great appeal with commercial productions hoping to show off the latest vehicle in a raw environment. 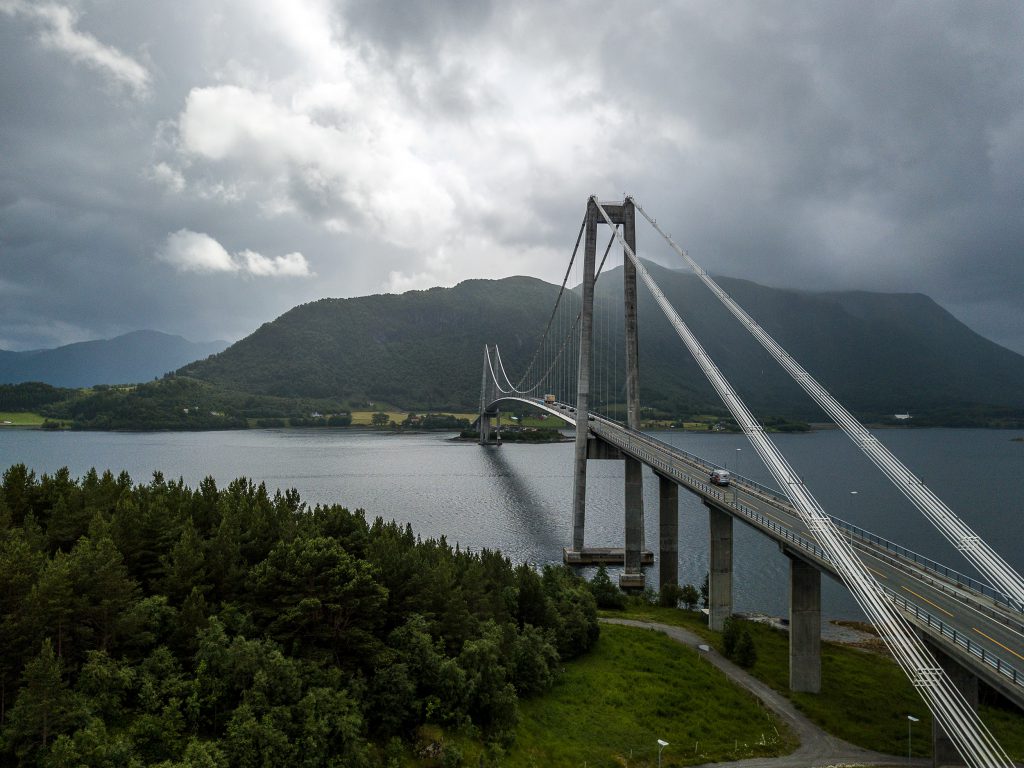 Sigmund Elias Holm of the Western Norway Film Commission details: “the continuous popularity of the Atlantic Road comes chiefly down to its versatility. The road spans eight bridges and there are endless ways of framing the playful, bold, twisting architectural forms. Not to mention Norway's production service industry has the equipment to make the most of it, from a Russian Arm to state of the art aerial systems. The close proximity to other road locations, such as Trollstigen and the hitherto undiscovered Aursjovegen and Vengedalen, is an added bonus.”

Even the Norwegian climate seems to be catered towards production activity. During the summer months, the sun rises at 4:30am and doesn't set until 11:30pm, giving you plenty of time to shoot in any location you choose without being caught out.

Adding to the atmosphere of the trip was the overwhelmingly positive attitude of our hosts and their colleagues. It’s often said that the quality of life in Scandinavia is much higher than in other parts of the world, an idea reflected in its inhabitants. Norway’s production professionals have been honing their skills on domestic productions for years and as the country is now breaking onto the international scene, we were met with smiles, firm handshakes and an earnest desire to make great content.

This week alone, the country will be hosting two major projects: the action-fantasy feature film, Mortal, and ITV’s crime drama, Shetland. Shooting on location at the Hardangerfjord, Mortal is a great example of Norway’s co-production capabilities. As a collaboration between British, American and Norwegian entities, the project is able to qualify for the Zefyr film fund.

When the time came to leave our gracious hosts and their beautiful country, we all left feeling confident about Norway’s future on the production scene. As Lori Balton brilliantly summarised: “there is something primal about the landscapes, as though the ice age had just passed through. The terminal moraine strewn about and the striations etched into the earth contribute to the primitive roughness. The forests were endless, the people warmly emanating a can-do spirit.” 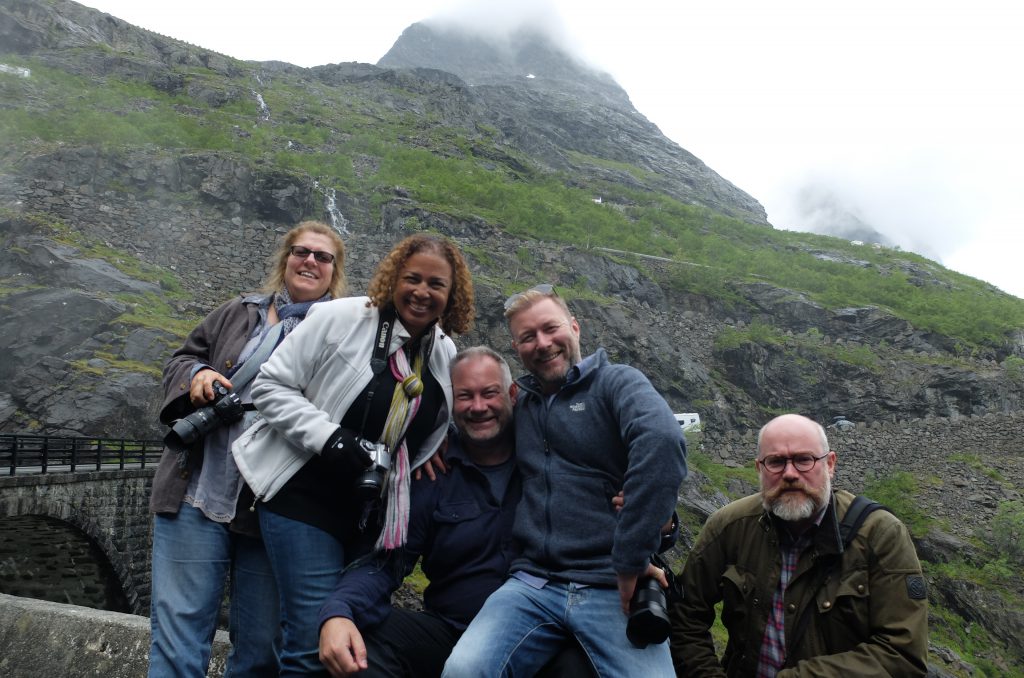 If you want to learn more about what Norway can bring to your next project, both the Western Norway Film Commission and Film Commission Norway will be attending FOCUS, London’s international production event, December 5th and 6th at the Business Design Centre.

The Location Guide would like to thank Sigmund Elias Holm, Per-Henry Borch, Steve Michael Røyset and all those who made the familiarisation tour such a success.

Lori Balton, Alison Taylor, Tom Howard and Per-Henry Borch are all members of the Location Managers Guild International (LMGI), the global organisation dedicated to unifying production practices within the industry.