Written by Tom Deehan on Aug 23, 2017. Posted in On Location / Production News

The spectacular battle at the heart of the latest Game of Thrones episode 'Beyond the Wall' was shot on a large-scale outdoor set in Wolf Hill Quarry, Belfast, imitating the landscape that the show traditionally utilises in Iceland. 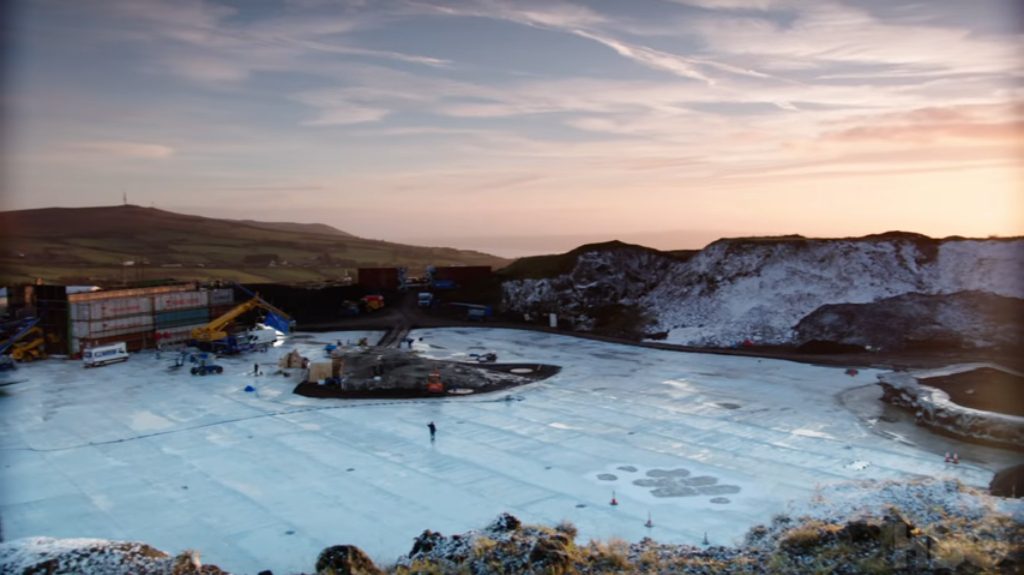 Location Manager Robbie Boake details: "for this sequence, we started with detailed UAV Aerial scans as we do on all our larger locations and builds. This generates a 3D model as a point of reference for our geotechnical surveyors who are able to let us know which areas are safe and which are not accessible for our operation. It doubles as a valuable information tool for the Art department and our VFX people who then get the benefit of owning the terrain digitally in a 3D point cloud model, which gives them a head start on mapping, previs and art concepts. These scans were all completed a full five months before filming commenced on location"

The sequence sees Jon Snow and his group become surrounded by hordes of the undead as they seek refuge on a small island in the middle of a frozen lake.

Boake continues: "we then had to drain a substantial portion of the quarry along the cliff faces which was almost knee height in water when we started. To do this, it involved the usual detailed environmental surveys to make sure no protected species was harmed. Thankfully, we secured the environmental all clear and then had to drill a three foot deep trench into the bedrock to send all the water out of the quarry. The 3D surveys assisted greatly in helping us work out the best routes for the drainage. The trench was 150 metres long. We then had to move substantial amounts of rock and stone (plus 6000 tonnes of material) from the main staging area and then level the quarry floor which meant building the lower part of the quarry up by almost three feet."

"Once we had the quarry in shape after a few months work, we handed it over to our Construction department who laid a thick layer of load bearing concrete (around 500 cubic metres) over the entire area. We then moved our work to address access issues and built an additional three roads into the quarry which allowed technical access from previously inaccessible areas. It also gave the SFX team the freedom to move their Bezzlers 360 degrees around the quarry bowl and maximise prevailing winds for all the thick fog needed to make it work."

The group’s initial trek beyond the wall was shot on location in Iceland. Production services for the Iceland scenes were provided by Pegasus Pictures.

Iceland and Northern Ireland are both consistently sought after filming locations, due in part to their competitive production incentives. The UK offers a 25% tax rebate on a minimum spend of GBP1 million per broadcast hour while Iceland offers a 25% reimbursement on eligible local expenditure.

A large portion of  the current season was also shot on location in Spain with support from Fresco Film Services. Pre-production is now underway for the eighth and final season of Game of Thrones.

Film in Iceland, the nation’s dedicated film commission will be attending FOCUS - the meeting place for international production in December. Click here to register your interest in the event.