Written by Tom Deehan on Oct 9, 2017. Posted in On Location / Production News

An hour-long biopic about Eddie Braben, the scriptwriter behind comedy duo Morecambe and Wise, will film on location in Bristol and at The Bottle Yard Studios. Principal photography for Eric, Ernie and Me will occur over a two-week period at locations including Colston Hall (pictured), Thingwall Park and the Wills Building. 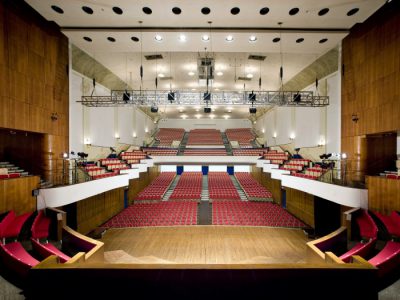 The production will also take residence at Studio 6 in The Bottle Yard, utilising up to 8,000 sq. ft. of space in the process.

Producer Alison Sterling explains: "the presence of The Bottle Yard as a filming resource in Bristol has been an enormous boon to the local film industry. There is a thriving network of really high-quality crew in the region which is helping us in the making of Eric Ernie and Me. Nearly all our crew and equipment are based in the Bristol region and we are delighted also to be able to use locations in the communities of Filwood, Brislington and St Anne’s. All the local residents have been exceptionally welcoming.”

Natalie Moore of the Bristol Film Office adds: “what could be more intriguing than a look at the relationship behind the success of the nation’s favourite double act? We’ve helped line up a variety of locations for this shoot and it’s fantastic to see the many sides of Bristol, from residential Knowle West to the iconic Colston Hall, portraying a 60’s and 70’s period British setting for a story about one of the most popular comedy duos of all time.”

The special is being produced by Objective Fiction, with Executive Producers Ben Farrell and Toby Stevens.

Bristol boasts one of the UK’s liveliest production hubs outside of London. The county recently hosted filming on the upcoming season of BBC’s Poldark.

High-end television programmes that spend at least GBP1 million per broadcast hour within the UK can receive a 25% tax rebate. The incentive is also available to feature films but with a lower ask of only 10% of an overall budget.