Written by Tom Deehan on Oct 13, 2017. Posted in On Location / Production News

Hip-hop group Gorillaz and service provider E.ON have come together to showcase the power of solar energy in a new commercial shot on location in the Garraf area of Barcelona. Taking over a large quarry, the spot was serviced by twentyfour seven and depicts a wide array of toys that come to live with the use of solar power. 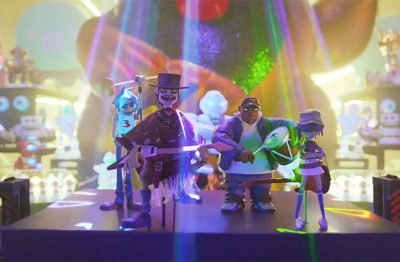 Producer Lole Ramirez explains: “Producer Ewen Brown from Blink came to us with the amazing Director Noah Harris and DOP Patrick Meller. Their vision was clear and they quickly conveyed exactly what they needed. Whilst we were pre-producing in Spain, Production Designer Drogo Michie and Art Director Kate McConnell worked from London, sourcing all the battery-operated toys you see on screen. They rigged hundreds of toys and designed what would be our final stage."

Lole continues: "our local Production Designer Delfín Emiliano championed the creation of all the platforms that created our festival stage for all the toys. His crew worked for days prepping the rechargeable batteries, all charged with solar panels, and getting all our toys ready and assembled for the shoot. Delfin also supervised the mise-en scene of all toys and the choreography of having eveyrthing powered and in motion for our shots, which was especially difficult on that lovely wide-shot where the whole stage comes alive."

As one of the most developed and visually distinctive European hubs, Barcelona enjoys a consistent popularity with international productions. Last year, ICONOCLAST used a variety of locations within the city to film a commercial for Haig whiskey.

Outside of Barcelona, Costa del Morte recently played hosted to Nissan’s campaign for the Percebeiros Shield, serviced by PSN Spain.

Spain's production industry is incentivised by a dedicated tax incentive. Rebates of up to 15% can be acccessed by international features and television shows but not by commercials. A higher rate of 40% can be tapped into when filming on location in the Canary Islands.