Written by Tom Deehan on Oct 18, 2017. Posted in On Location / Production News

Filming in Croatia for the musical sequel, Mamma Mia! Here We Go Again has now come to an end. The production used the island of Vis for a shoot lasting 24 days, employing 270 local professionals in the process. 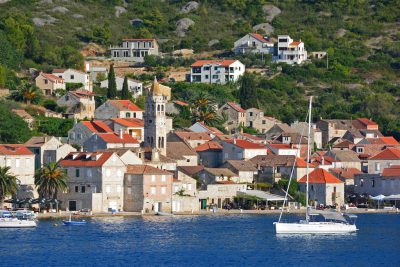 Initial plans to have the production return to Greece, the host location for the first film, were disbanded in favour of accessing Croatia’s highly competitive tax incentive.

Without a dedicated film incentive programme, Greece has struggled to maintain a steady flow of inbound productions. The handful of projects to have recently filmed in the country includes ITV’s period drama The Durrells and Richard Linklater’s Before Midnight.

Directed by Ol Parker, Mamma Mia! Here We Go Again is being produced by Universal. The production will now move to the UK to use soundstages at Shepperton Studios.

The original cast, which includes Amanda Seyfried, Meryl Streep and Pierce Brosnan, have all returned to reprise their roles in the sequel. Newcomers to the cast include Lily James (Baby Driver) and pop-superstar Cher.

Croatia enjoys a reputation for being one of the most active production hubs in the world. In the short time that the country’s film incentive has been in operation it has already attracted major projects such as HBO’s Game of Thrones, Star Wars: The Last Jedi and more recently the next installment in the long-running James Bond series.

Feature films, documentaries, TV shows and animation projects can receive a 20% cash rebate upon meeting a minimum local spend in Croatia. The required spend varies between production types, going from as low as HRK300,000 for documentaries to HRK2 million for feature films.