Written by Tom Deehan on Oct 31, 2017. Posted in General Interest

Plans to construct a state-of-the-art production facility in Dagenham, East London have moved one step forward after a government-led study declared the site to be a well-suited location. With the study reporting in favour of the project, organisers will now look for potential investors to help fund the studio’s construction. 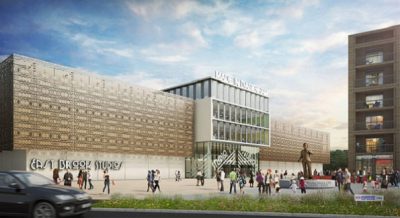 The results of the report were presented by London Mayor, Sadiq Khan, and Darren Rodwell, the leader of Barking and Dagenham Council. The former explains: “London is a global capital for film – from Bond to Bridget Jones, and Star Wars to Paddington – and I know these new studios will have us hot on the heels of Hollywood for blockbuster movies, showing the world that London is open to creativity, business and talent. I am determined to do more to support economic growth and create new jobs across London. A new film studio in Dagenham East will bring hundreds of new jobs to the area, benefiting everyone from carpenters to camera operators.”

Darren Rodwell adds: “this is a landmark day for Barking and Dagenham and yet another sign that we are turning the tide on the borough’s fortunes. We were known for producing cars in the last century but today we aspire to produce blockbuster films. Together with city hall, our plans demonstrate our commitment to bring jobs and new opportunities to East London.”

According to the study, roughly 780 full-time jobs will be made available alongside an annual revenue of GBP35 million as a result of the studio.

The facility, which is being developed by Be First (Barking and Dagenham Council’s urban regeneration company) on a 17-acre site of land, will be the largest of its kind in Greater London.

With the growing popularity of the UK’s production industry, local studio space has become notoriously overbooked to the point where producers are using pop-up studios to complete a shoot. Having a major production facility so close to Central London will help to alleviate the strain on other studio spaces nationwide.

London has recently played host to such feature films as Kingsman: The Golden Circle and The Hitman's Bodyguard. Productions can access a 25% tax rebate upon meeting a required minimum spend within the UK.