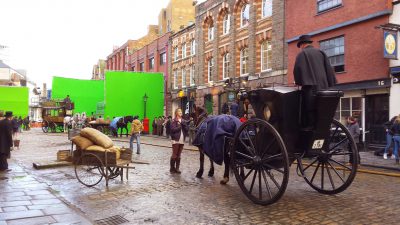 Marvin Rees, the Mayor of Bristol notes: “this is fantastic news and a ringing endorsement of Bristol’s position as a world leader in film production, education and training. Our reputation as a diverse and creative city has long helped to attract productions and talent across film, TV drama, animation and of course natural history. I hope this recognition will be a catalyst for bigger opportunities for the city and Bristolians to showcase Bristol as a centre for film.”

Fiona Francombe, Site Director of The Bottle Yard Studios adds: “this is a great result, we warmly welcome the recognition that UNESCO City of Film status will bring to Bristol, a city with film and TV production at its core. In recent years The Bottle Yard Studios has attracted new attention from producers at home and abroad, providing fresh opportunities for the local industry, but it’s also important to note that the longevity of Bristol's filming heritage is testament to its outstanding specialist workforce. The art directors, set builders, camera operators, supporting artistes, make-up artists, costume designers, visual effects and post production specialists – talented experts that help this sector stand out as an essential cornerstone in Bristol's cultural and economic success. This new status will raise Bristol's profile on the international stage even further. It will bolster our reputation as a city that offers the full package of support and really understands the language of filmmaking.”

The success of Bristol’s production industry has been well documented over the last few years. With more projects looking for locations outside of London, filming activity in Bristol increased by 31% from 2016-17.

Recent productions to have shot in Bristol include the fourth series of BBC’s Poldark and the medical thriller from Red Production Company, Trust Me.

Bristol’s production industry is stimulated by the UK’s tax rebate on filming activity. Feature films and high-end TV shows that reach a required minimum spend can receive a rebate of up to 25%.