Written by Tom Deehan on Nov 9, 2017. Posted in On Location / Production News

The live-action remake of Disney’s animated feature, Aladdin, is currently filming on location in Wadi Rum, Jordan. Principal photography began in September with soundstages being utilised at Longcross Studios in the UK. 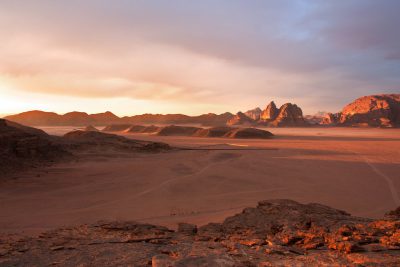 Set in the fictional city of Agrabah, Aladdin also features scenes in the surrounding area which would fit the aesthetic of Wadi Rum.

Commissioner of Tourism and Commerce in Al Aqaba Authority's special economy unit, Sharhabil Madi explains: “there will be dozens of artists and international stars, Arabs and foreigners who will participate in the production of Aladdin, which is now filming in Wadi Rum for a period of up to two months.”

Directed by Guy Ritchie, Aladdin is just one of several live-action remakes planned for some of Disney’s most famous properties. Production is also underway in California for Jon Favreau’s retelling of The Lion King.

Due to its lack of a dedicated film incentive programme, Jordan attracts fewer productions than nearby production hubs such as the United Arab Emirates and Malta, but the country does enjoy a modicum of popularity with high-budget feature films.

Jordan played host to Gareth Edwards’ Rogue One in late 2015 and more recently to Ridley Scott’s upcoming drama, All the Money in the World.

Productions filming in Jordan are exempt from paying sales, customs and salaries tax. While these exemptions aren’t competitive against a dedicated tax or cash rebate, they do help to offset the overall cost of filming in the country.

Aladdin is scheduled to be released 24th May 2019.

The Imaginarium Films in Jordan will be attending this year's FOCUS event - the meeting place for international production in December. Click here to register your attendance.