Written by Tom Deehan on Nov 21, 2017. Posted in On Location / Production News

Paul McGuigan’s romantic drama, Film Stars Don’t Die in Liverpool, utilised locations in both its titular city and throughout London. The film’s stars, Annette Bening and Jamie Bell, can be seen enjoying a boat ride on the Royal Mersey Ferrey, getting a drink at the Philharmonic Dining Rooms and reciting lines of Shakespeare at the Liverpool Playhouse. 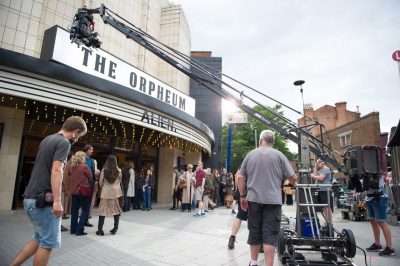 A sequence set in a guest house in London’s Primrose Hill was actually filmed on location in Huskisson Street.

Co-produced by Eon Production and Synchronistic Pictures, the film is based on Peter Turner’s memoirs of same name which detail his relationship with Hollywood star, Gloria Grahame.

During the London portion of the shoot, the production visited Haringey, Lewisham and Camden. FilmFixer Director, Karen Everett explains: “in Haringey, Muswell Hill’s Everyman Cinema saw Bening and Bell filming scenes where they queued outside, with other cinema-goers, keen to get in to the movie Alien."

The cinema’s interior was filmed at the Phoenix Cinema in East Finchley, one of the oldest cinemas in London. The site first opened in 1912 and has been in operation ever since.

Karen continues: "80 cast and crew filmed in Crouch End’s Earl Haig Hall, where the couple go to a pub theatre in the late 1970s to watch stand up. And interior scenes were filmed at the Old Hornsey Town Hall with 80 cast and crew.”

Two days were spent filming at Hampstead Theatre in Swiss Cottage: “for these scenes, 160 cast and crew shot scenes where Annette Bening as Gloria Grahame stars in a stage play, in front of a large audience.”

Feature films that shoot in the UK can receive a 25% tax rebate upon spending at least 10% of their budget locally. Paddington 2 recently incurred an extensive shoot at London’s Primrose Hill.