Written by Tom Deehan on Nov 8, 2017. Posted in On Location / Production News

During production on Paddington 2, the film spent more than twice as much time shooting at Paddington’s home in Primrose Hill than its predecessor. Located in Chalcot Crescent, the site had become such an iconic location that the sequel’s script called for it to be featured more frequently. 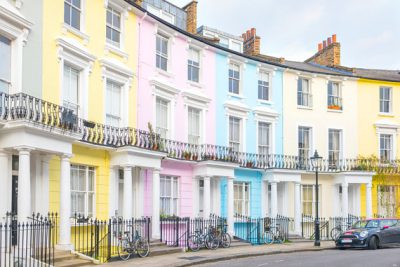 Supervising Location Manager, Jonah Coombes explains: “the script absolutely depended on this location, it’s become synonymous with the family. The pressure to make it work was real. For the first Paddington, we were on location in Chalcot Crescent for four days but this time around we would have to be there for two weeks. So at the very early stages of the project I went and sat down with the local residents group, the Primrose Hill Community Association (PHCA), to get a feel for how we might be received.”

100 members of cast and crew were present during the Chalcot Crescent shoot, which was arranged in collaboration with FilmFixer.

Jonah continues: “this meant we had to invest far more time and effort in consulting residents and making answers available for them, along with plans and changed plans. The extra effort was absolutely worth it. We really had to be respectful and get this right. It’s important that residents see this film and are able to feel proud of it – that this was filmed on their doorstep. Lots of locals tell us they’re individuals and not represented by an association but I always explain that it’s easier for us to negotiate on a resident’s behalf with one organisation, so we do ask locals to participate in their residents group.”

Other locations include the Camden Lock towpath where Paddington chases a thief by the canal, and Tower Bridge where Phoenix Buchanan (played by Hugh Grant) hides in a suit of armour. Soundstages were utilised at Warner Bros. Studios Leavesden and Pinewood Studios.

The UK’s film industry is incentivised by a 25% tax rebate on production expenditure. Feature films need only spend 10% of their budget within the country to access the incentive.

Paddington 2 will be released on November 10th in UK cinemas nationwide.