Written by Tom Deehan on Nov 7, 2017. Posted in On Location / Production News

Production is now underway for Reed Morano’s action-thriller, The Rhythm Section, with scenes being shot on location in Dublin’s Talbot Street. The area is currently being doubled for London as a black cab and a red telephone box have been brought to the location to achieve the effect. 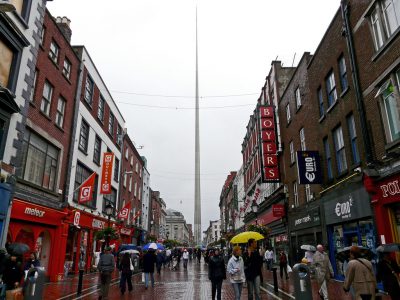 Additional shoots are expected to take place in the United Kingdom, Spain, Switzerland and the United States. The Rhythm Section, which is being produced by Eon Productions and IM Global, is a modern adaptation of Mark Burnell’s novel of the same name.

Speaking to Variety, Producers Michael G. Wilson and Barbara Broccoli explain: “we are thrilled to be bringing Mark Burnell’s The Rhythm Section to the big screen with our partners at IM Global. It is exciting for us to be working with the immensely talented team of director Reed Morano and actress Blake Lively who have a strong vision for this very compelling story driven by a female protagonist.”

IM Global co-founder, Stuart Ford adds: “in Stephanie Patrick [protagonist of The Rhythm Section], Mark has created a unique female heroine who turns so many of the current cinematic clichés surrounding so-called ‘kick-ass’ female leads on their head. To be bringing such a fresh, realistic, and bold international thriller to the big screen with EON Productions, Reed and Blake is an exciting proposition for us all at IM Global.”

While a release date has yet to be finalised, Paramount Pictures will handle the film’s domestic distribution.

The Irish Government can provide a 32% tax credit for productions that shoot on location within the country. Various criteria must be met to access the incentive, which has a EUR70 cap per-project. Ireland recently hosted production on Star Wars: The Last Jedi and Transformers: The Last Knight.