Written by Tom Deehan on Dec 13, 2017. Posted in General Interest

Registration is now open for this year’s Straight 8 contest, held in conjunction with ADFEST, the Advertising Producers Association and Cinelab London. The contest calls on all companies working within APAC and MENA regions to submit a project on a roll of super 8mm film with no second takes, editing or post-production. 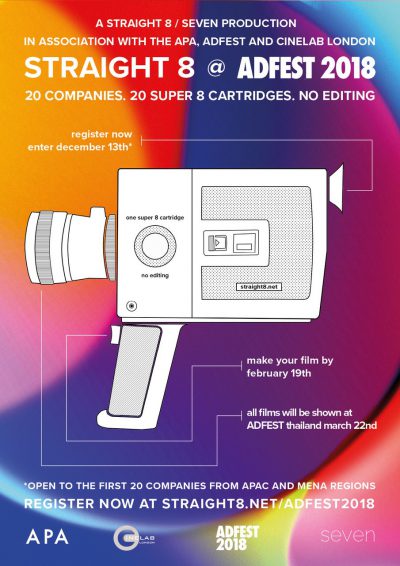 Entries are granted on a first come, first serve basis, and each project cannot be longer than two minutes and 30 seconds. Contestants will be supplied with a film cartridge which must then be sent back exposed and un-processed by February 19th 2018.

Jimmy Lam, President of ADFEST details: “some of the world’s most famous agencies have participated in Straight 8 industry shootouts – now it is time for creative companies in the APAC and MENA regions to have their chance to participate, too. It’s not often you get the opportunity to make a film with no brief, in one of the hardest ways possible, while also raising money for charity, so I encourage creative companies to get involved and show off their talents at ADFEST 2018.”

Steve Davies, APA Chief Executive adds: “Straight 8 is a competition of pure creativity and creates a fantastic screening because no one knows what is coming up - even the filmmakers who have sent their films off to be developed and not seen them since. It’s tense and spectacular. The APA is proud to have supported straight 8 since soon after Ed came up with it.”