Written by Tim Dams on Dec 14, 2017. Posted in Awards and Festivals / General Interest

There was a strong contingent representing the UK at this year’s FOCUS show, the meeting place for international production. Local and national screen agencies through to production services companies, location providers and production technology firms were among the UK exhibitors, many of them based in a dedicated UK Focus zone at the Business Design Centre in Islington.

All were looking to meet with hundreds of production professionals from over 50 countries, such as executive producers, producers, directors, production managers, location directors and unit managers, who attended FOCUS to seek ideas and inspiration for their next production.

"The audience here are the people we want to speak to."

Among them was Aerial Craft, a firm specialising in drone filming. Focused on the high-end TV and film market, Aerial Craft has worked on shows such as Sherlock and Doctor Who. This year was the first time the company had attended FOCUS, according to co-director Henry Symons-Jones, who said: “It was a bit of a stab in the dark for us to come here, but we’re really happy. Lots of producers come here, there have been lots of people to talk to, and we’ve been getting our name out there. And it’s not just UK interest, but from overseas too.”

Another production technology company attending FOCUS was JB Locations, which was showcasing its hydrogen powered tower light, the Ecolite TH2 in collaboration with Taylor Construction Plant Ltd and BOC. Stressing its environmental credentials, company director Ben Patton pointed out that it is far cleaner and less noisy than a diesel powered tower light, so it can also work indoors or on night shoots. Patton said one of the reasons for exhibiting at FOCUS is that there are “a lot of faces we know here,” among them many unit and location managers who decide to hire kit like the Ecolite TH2. 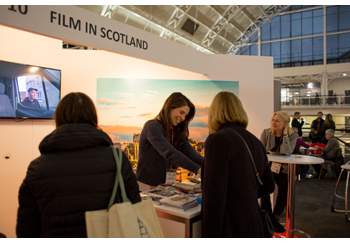 Film Floor was also attracting interest from visiting producers and location managers to FOCUS. “The audience here are the people we want to speak to,” said Film Floor director John Lygo. Film Floor is cleverly tapping into the huge demand for studio space in the UK by building temporary structures that can be used as studios, sound stages, prop stores or catering facilities. Built on legs, they can support a deck on any terrain, from sloping to undulating. And because they are temporary structures, planning permission can be easier to secure. Lygo points to a poster-sized picture on his stand of one of the temporary studios it recently built, near Leavesden. Called the MaxR Sound Stage System, it’s 8,500sq ft and takes just 8-12 weeks to build.

"FOCUS really is an opportunity to showcase ourselves as a location."

There were plenty of companies offering real locations at FOCUS too, from Alexandra Palace, to the Jockey Club, Tatton Locations and the Crown Estate. Among them was the Ace Hotel, based in fashionable Shoreditch. “Location shooting has become a big part of our business,” says Ace Hotel’s Louise Lyons, who explains that till now it has grown organically as a result of people staying at the hotel or attending events there. “But FOCUS really is an opportunity to showcase ourselves as a location.” The Ace Hotel’s skyline looking over London is a big draw for many location shoots. She adds that productions also book the hotel for talent to stay in, as well as for press interviews and for production meetings. 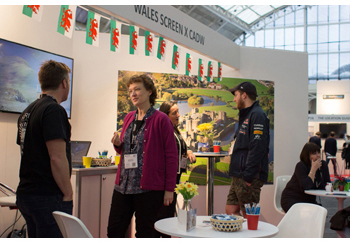 With production of high end TV and film booming in the UK, there were many companies looking to tap into demand for their services at FOCUS. Tony Scott, operations director of Dynamic International, a leading industry freight forwarder, said business is busier than ever, citing its work arranging the transport of cameras, lights, costumes and props to international locations for shows such as Game of Thrones or films like Jason Bourne. “There’s been lots of clients coming into the show, popping over to say hello.” Scott said he has had new enquiries too, and the opportunity to meet film commissions from around the world to gather the latest information about getting equipment in and out of countries safely.

"So far we have had a fantastic response."

Exhibiting nearby in the UK zone was Above the Line, which offers on set security for movies such as Star Wars: The Last Jedi and Jurassic World. Above the Line’s Lamorna O’Toole said business is very busy thanks to the many international films choosing to shoot in the UK; the company had 150 security people a day working on Jurassic World alone. “FOCUS is perfect for us. It’s specific to what we are doing, and is a great opportunity to meet with location managers.”

Also at this year’s FOCUS was British-based expense management platform FairFX, which allows productions to give cast and crew pre-paid debit cards for their travel expenses in place of cash. Lots of productions still use cash, explained chief commercial officer James Hickman, but doing so is complicated, expensive and hard to keep track of. He said FairFX’s cards are “the most cost effective way of doing expenses” for productions. FOCUS is FairFX’s first show and foray into actively marketing its product in the film and TV market. “We felt this was a good fit, and also we wanted to learn about the industry,” said Hickman. “So far we have had a fantastic response. It has been really good, and we’ve had a steady stream of enquiries.”

Of course, film commissions were also key British exhibitors at FOCUS, such as Wales Screen, Creative Scotlandand Creative England and FO:UK (Film Offices UK). Liverpool Film Office manager Lynn Saunders was one of many city film commissioners at the show, explaining that production levels were up by 55% in 2017 thanks to the boom in production in the UK.

Situated between Britain and Ireland, the Isle of Man was represented at FOCUS for the first time this year. Over 100 features have been made on the island since 1995, said Shelley Langan of Isle of Media, pointing to a multi-million pound fund run by the agency to support production. “It’s the first time we’ve had a stand here at FOCUS. I’ve been really impressed – we’ve seen a constant stream of people. And it is good for us too to see what other people’s offer is and how we fit into the whole production ecosystem.”

"I thought it was an excellent trade event and would fully recommend other industry professionals to attend."

FOCUS also featured a fully functional English pub on the showfloor, courtesy of Dresd, the organisation dedicated to recycling set waste. Kitted out with traditional pub fixtures, The Dresd Inn was used to host a number of events including the Focus Opening Drinks.

Executive Producer Callum McDougall (Spectre, Skyfall, Mary Poppins Returns) visited FOCUS 2017 and described the event as "an excellent opportunity to visit UK regional agencies and service providers. I thought it was an excellent trade event and would fully recommend other industry professionals to attend."

For further information about FOCUS 2017: