Towards a green film future: Sustainability and the global production industry

The topics of sustainability and manmade climate change have become commonplace in the discourse of business, politics and general everyday life, and our industry is no exception. Many people are now aware of the two-degree figure: the temperature increase we must not go beyond, in order to avoid catastrophic climate change. Right now, we have around 15-20 years to rapidly decarbonise before that figure is reached.

One of the most prolific industry bodies to take a stand with sustainability is BAFTA, through their support of the albert initiative. The team at albert are making great strides in having their carbon calculation tool be common place both on UK film and TV productions, and around the world. Since it’s introduction around seven years ago, over 3,000 carbon footprints have been completed and the team have a good understanding of the industry’s impact on the environment. On average, one hour of broadcast TV will have generated 12.9 tonnes of carbon emissions from production through to transmission. To put that into perspective, the average yearly footprint of a UK citizen is around 12-14 tonnes. We also know that independent production companies alone produce over 20,000 hours of TV in the UK every year! Now that’s a big impact.

"The BBC is an industry leader in sustainable television production."

To help raise awareness of the tools and resources available in the UK, myself as Founder of Adgreen, and Aaron Matthews, albert’s Industry Sustainability Manager attended this year’s FOCUS event. As part of our involvement we ran a workshop and hosted a Green Zone, dedicated to showcasing suppliers offering greener products and services. Events such as FOCUS allow us to show people what they can do in order to reduce the impact of their shoot.

The recent Sustainable Production Forum at the Vancouver International Film Festival showed just how big an appetite there is for information, accessible tools and, ultimately, change. It’s great that we can offer similar sessions in the UK and share our vision with attendees - for all UK screen content to reflect sustainable living and be made in a way that benefits both people and planet. On albert’s involvement, Aaron notes:

“Environmental sustainability requires a cooperative approach; collaboration between teams, companies and sectors. I am delighted that albert was part of FOCUS 2017. What better place to have this discussion than at a meeting place designed to unite and facilitate industry creativity and progress.”

"Despite the strides we’ve made in the advertising industry, there's still a long way to go."

In support of our shared vision, the BBC announced earlier this year that all of its drama programming would now adhere to albert’s regulations, ensuring a responsible production process and laying the groundwork for other companies to follow suit. In detailing the decision, the BBC’s Director of Content, Charlotte Moore noted:

“The BBC is an industry leader in sustainable television production, and the albert scheme has played a large part in that. Making the calculator mandatory is a practical way to help production teams reduce their impact on the environment and to embed sustainable production values in all of our shows.”

Whereas albert focus on the film and TV sectors, we at AdGreen are working to improve sustainability measures within the advertising industry. Having begun with information aimed at production and crew, we have also recently introduced an advertising agency section to our website. Sensing a lack of support for agency creatives and TV departments, and a real desire from them to get involved, we've also created a free to use, online Sustainable Production Agreement to help agencies and production companies to work together to establish what can be achieved on each shoot. 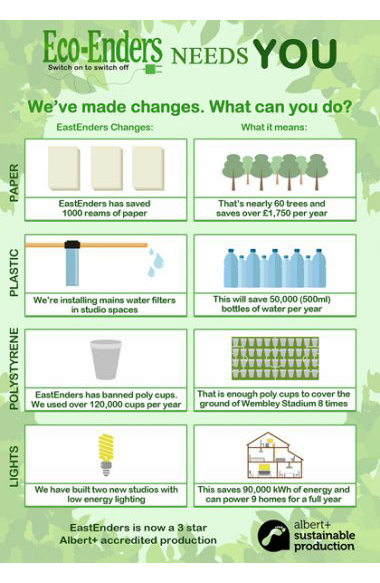 Ram Board, a recycled and recyclable alternative to the more common Correx location floor protection is also great, although it doesn't come in sheets, which makes it less popular amongst location managers and runners. Increased demand could lead to a sheet version being created to fill the gap in the market. Low energy lighting and alternatives to usual black and white polystyrene are also available. For whatever’s leftover at the end of the shoot, we’ve had a lot of success with recycling and food waste collection from Quantum Waste, as well as donating leftover food to City Harvest.

We’ve detailed many productions that have been making these small changes on the Get Inspired By Others page of our site, including greener shoots produced by Acne, Tantrum, Dark Energy and Rattling Stick. These case studies, written by a small team of production managers, can offer inspiration to others hoping to adopt sustainable strategies.

Despite the strides we’ve made in the advertising industry, there's still a long way to go. We know from albert’s data that reducing waste by cutting down on materials is just the tip of the iceberg (no pun intended).

On almost every shoot, it’s emissions from transport and power that account for the biggest part of the carbon footprint. Location generators guzzle diesel and many of our usual studios are powered by fossil fuels. A studio switching to a renewable energy supplier will result in a much bigger energy saving than simply reducing the amount of water bottles and paper a shoot uses. However, there's currently no cross-industry policy involving all of our trade bodies, no real footprint measuring and as a result, no reduction targets. Without agreed standards there isn't a huge demand for more sustainable products and services so improving infrastructure and convincing suppliers to make big changes (like switching to renewables) is very difficult.

There are a variety of studio complexes worldwide however that are designed specifically with sustainability in mind. London’s Sunbeam Studios employs a range of eco-friendly measures including the use of recycled materials, hybrid vehicles and discounts with local bike vendors to encourage crew members to cycle. Most importantly, Sunbeam are on a renewable energy tariff. 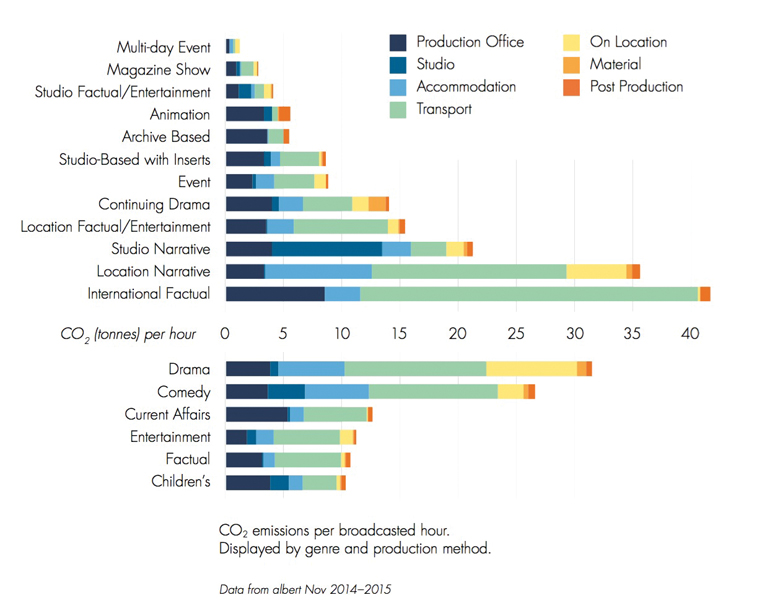 The biggest change most companies could make, whether a studio, production office, rental company or post house, is switching their electricity to a renewable tariff. Albert have a great project called Creative Energy, allowing companies in the creative industries to group together for lower rates on renewable energy. If enough businesses join, we could even see a creative industries wind farm pop up somewhere in the UK! Studio complexes and post houses running massive render farms would see a huge reduction in their impact by doing this, and in turn it would lower a production's footprint considerably. Productions can only be as good as their suppliers enable them to be.

Speaking for the advertising industry, I think it's imperative that we have a cross-industry policy, with proper funding to allow for a carbon calculation tool, analysis of our footprint and ambitious reduction targets. Training will also be essential to help people in each part of the process to understand what they can do and why it's so important. Only then can the advertising industry have a hope of helping to keep that scary two-degree figure at bay a little longer.