Written by Tom Deehan on Jan 30, 2018. Posted in General Interest

2017 was Liverpool’s busiest year for production to date

Statistics released by the Liverpool Film Office show that 2017 was the city’s busiest year for filming, with a generated income of GBP11.1 million. The expenditure was derived from 289 unique projects that incurred a record-breaking total of 1,359 shoot days. 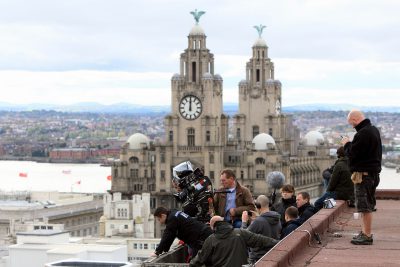 Assistant Mayor and Cabinet Member responsible for the Film Office, Councillor Wendy Simon explains: “for many years Liverpool has been one of the UK’s most filmed locations outside of London, and it’s fantastic to see that the city retains that appeal with productions returning to the city time and time again."

She continues: "this city provides the perfect backdrop for directors – there are so many diverse and stunning locations on offer and Liverpool can be transformed into different destinations – whether it be New York, London or Eastern Europe – its appeal is endless."

Throughout 2017, Liverpool played host to a number of high-profile projects including Film Stars Don’t Die in Liverpool, the fourth season of Peaky Blinders and the upcoming biopic, Tolkien.

Sarada McDermott, co-producer for Tolkien adds: “Liverpool was perfect location to film key scenes for our production. The area around St George’s Hall provided us with the period shots we needed, and the space allowed us to create a brand new set to meet our needs. The team at the Film Office were fantastic and I’d have no hesitation in returning to the city again to film.”

The city’s reputation as a production hub received a significant boost with the release of Fantastic Beasts and Where to Find Them in 2016, as the production used Liverpool to cheat for New York City.

Productions that film in Liverpool can access the UK’s incentive programme – a 25% tax rebate that is provided when a required minimum spend is met.