Written by Tom Deehan on Jan 9, 2018. Posted in On Location / Production News

Bristol stars as the main location for Channel 4’s new drama, Kiri. Shot over a period of two weeks in August 2017, the four-part series features St Andrews Park, The Downs, the Cumberland Basin area, Napier Road, the Bear Pit and other locations. 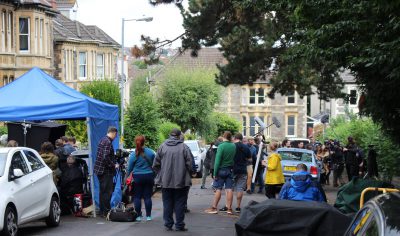 Location Manager Jason Keatley explains: “it was a pleasure filming Kiri in and around the city of Bristol, with a massive helping hand from the Film Office who were incredibly accommodating in helping us achieve our goals at some tricky locations. When facing particular issues regarding the flying of drones in certain locations, thankfully they came up with solutions to keep all parties happy. I look forward to returning to Bristol on future projects, a city that is genuinely film friendly with excellent location support.”

Bristol Film Office’s Natalie Moore adds: “Bristol is an ideal urban backdrop for hard-hitting drama. Kiri’s shoot follows a number of other dramas in a similar genre the city has hosted recently, like Broadchurch, Three Girls and Thirteen. This particular shoot involved a large amount of drone shooting, which is steadily rising in popularity in TV production. Making this possible required a great deal of liaison with park authorities and other partners to arrange special permissions, given the new drone regulations and bylaws introduced last year.”

Due to its growing popularity as a filming location, Bristol was recently declared a UNESCO City of Film. The city has played host to a range of productions including Poldark, Ill Behaviour and Doctor Who.

Productions that shoot in the UK can receive a 25% tax rebate upon meeting a required minimum spend. Feature films must spend at least 10% of their budget locally to qualify while high-end TV shows must spend a minimum of GBP1 million per-broadcast hour.