Written by Tom Deehan on Jan 23, 2018. Posted in On Location / Production News

Created by MeadsDurket and serviced by Madam Films, the latest commercial for Hoehn Motors pokes fun at British etiquette in a total of 11 London locations. Among the featured locations are Middle Temple, Westminster Bridge, Jermyn Street and Victoria Embankment. 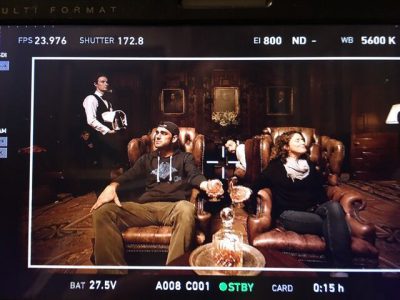 Carly Stone, Executive Producer at Madam Films explains: “shooting multiple locations in iconic Central London, we had to work quickly and nimbly, facing the challenges of traffic, lack of unit bases and a minimal amount of winter daylight hours. The job requirements began as a very small crew, cast and with a limited budget. The job soon grew however as the location list increased, crew size and talent trebled and of course the budget remained the same. We utilised our picture vehicles and locations as production bases. Our clients were our lead talent so we didn't have big video villages to contend with. It was really important for the client to have Big Ben included and we had to move away from the iconic Westminster Bridge shot due to Big Ben partially covered in scaffolding.’

Tony Durket, Founder of MeadsDurket adds: ‘Madam did an outstanding job! One of the most ambitious projects we have ever attempted and it was pulled off brilliantly by Michelle and the crew. I’m honoured to have worked with such an amazing company.”

Madam Films has extensive experience in servicing productions throughout the London area. The company recently worked on an international spot from Chile, utilising Dukes Island Studios in the process.

While inapplicable to commercials productions, the UK does offer a 25% tax rebate on filming expenses. Feature films are required to spend 10% of their budget locally to qualify, while high-end TV shows are asked for a minimum spend of GBP1 million per-broadcast hour.