Written by Tom Deehan on Jan 25, 2018. Posted in On Location / Production News

Production on Iron Sky: The Ark jumps from China to Finland

After incurring a nearly four-month shoot in China, production on Iron Sky: The Ark will now travel to Turku, Finland. As a Chinese-Finish-Canadian co-production, The Ark is the first film in the Iron Sky series to be produced by a Chinese company. 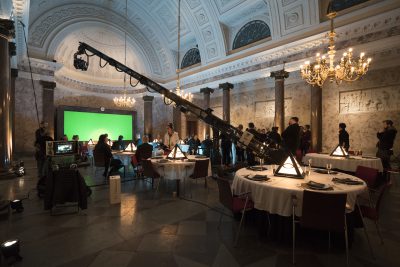 Operating on an overall budget of USD25 million, the crew will utilise Turku’s Old Academy Building to depict a luxury hotel in the Bavarian Alps. Filming was initially scheduled to take place in the Alps itself but the production was swayed by Finland’s cash rebate incentive.

Teija Raninen of the West Finland Film Commission explains: “the production incentive is the best thing to happen to the Finnish film industry in years. Big studios and production companies are now finally interested in everything Finland has to offer. We wouldn’t be sitting at the table without the incentive."

With regards to filming in China, Director Timo Vuorensola adds: “my experiences in China have completely exceeded my expectations; I had great actors and an efficient crew. It has been a pleasure to work with experienced actors such as Andy Garcia and Duan Yihong.”

Finland provides a 25% cash rebate to productions that meet a required minimum spend which varies between production types. Feature films must spend at least EUR150,000, increasing to EUR250,000 for television shows.

Among those projects recently hosted by the country are Aku Louhimies’ Unknown Soldier and ABC’s reality television series, The Bachelor.

A sequel to Iron Sky has already completed principal photography at AED Studios in Belgium and is set to be released later this year.

Iron Sky: The Ark will star Andy Garcia, Malla Malmivaara and Udo Kier. The film is scheduled for an early 2019 release.