Written by Tom Deehan on Jan 19, 2018. Posted in On Location / Production News

Production company Radical Media, with the help of LS Productions, brought their latest commercial for Ford's Eco Sport SUV to a range of Scottish locations. Directed by the filmmaking duo, Josh & Xander, the spot was filmed over a three-day period in Glasgow’s urban areas and the countryside of Argyll. 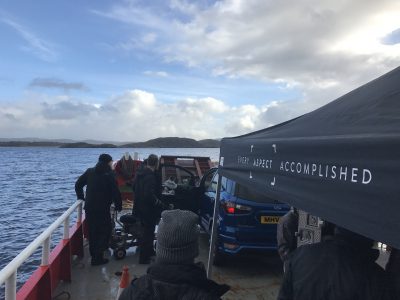 Deva Smith, Producer at LS Productions comments: “it was great to be able to put together a nice, talented Scottish crew and to show our American directors the most diverse Scottish landscapes, from urban designs to rolling countryside and rugged terrain. We took advantage of the changing weather, it added beautiful drama to the scene and the director was able to capture spray from the ocean waves.”

Executive Producer at LS Productions, Sarah Drummond adds: “we really enjoyed having Josh and Xander back over to Scotland. They love the diverse landscapes that Scotland has to offer, and they were super excited to get the chance to shoot here again. They really engaged with Scotland, it’s people and its landscapes, and for me it’s always good to shoot something that doesn’t have to be based specifically in Scotland.  Our locations are stunning and can fit with most narratives, and even some you wouldn’t expect.”

Due to its blend of rural and urban locations, Scotland is a highly popular filming hub across all production types.

While inapplicable to commercial productions, the UK does offer a dedicate tax incentive on filming. Feature films and television shows that meet a required minimum spend can receive a rebate of up to 25%.