Written by Tom Deehan on Feb 9, 2018. Posted in On Location / Production News

In the latest commercial for LG’s new OLED TV, Keystone Films found an accessible desert location on the outskirts of Dubai. With Central Films offering production services, the commercial filmed just an hour away from Dubai’s city centre. 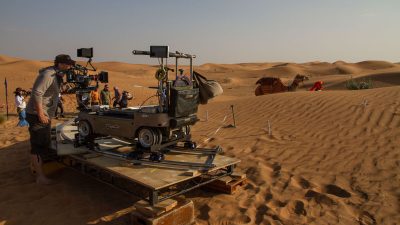 Producer at Central Films, Karen Coetzee explains: “we were able to choose a ‘360 degree view’ desert location that had rolling dunes into the far distances. The dunes were big enough to cast hard shadows for a lot of the day, not only at sunrise and sunset like smaller ones. Building sections of 90 degree circular track is a challenge in the soft and uneven desert sand, especially when it has to run absolutely precisely in order to match the shots for post-production.”

Keystone Films originally made contact with service companies in three separate countries during the search for a desert location. Dubai’s desert was chosen for its ease of access not only in terms of transportation but also in having readily available local crew.

Additional scenes were filmed on location in Thailand and South Africa. The combination of these locations play into National Geographic’s involvement as a co-partner for the spot.

While no formal incentive programmes as in place, Dubai does boast a highly trained pool of local production crew who have experience in working on feature films as well as commercials.