Written by Tom Deehan on Feb 8, 2018. Posted in On Location / Production News

Tourism Australia has released their latest advertising campaign in the form of a fake trailer for a reboot of Crocodile Dundee. The commercial, created by Droga5, was shot in Lawn Hill Gorge, Mission Beach, Quay Restaurant in Sydney Harbour, Montalto Winery, Kangaroo Island and Cable Beach. 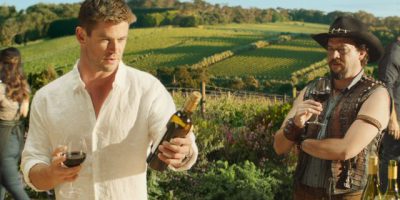 Released in segments and marketed as a genuine feature film in the run-up to the Super Bowl, the final commercial revealed the project to be an advertising tool for Australia's tourism industry. A total of AUD36 million has been spent on the campaign.

The commercial stars Chris Hemsworth and Danny McBride as they travel to several tourist spots throughout the country, lampooning some of Crocodile Dundee’s most iconic scenes in the process.

Australia’s Minister for Trade, Tourism and Investment, the Hon Steven Ciobo MP details: “the United States is a critical market for Australia, with close to 780,000 American visitors spending AUD3.7 billion per year. A favourable exchange rate and strong aviation capacity leading to highly competitive airfares makes this the right time to increase our investment in the United States."

He continues: “whilst Australia ranks highly among Americans in terms of desirability and awareness of our tourism offerings, we lag behind our competitors when it comes to actual bookings. This new campaign will address this conversion challenge. This is the single largest investment Tourism Australia has ever made in the US market and one we believe will grow annual spend by American visitors to AUD6 billion by the year 2020.”

Film tourism is now a multi-million-dollar industry that sees frequent collaboration between tourist boards and film commissions in order to create specialised travel experiences. The original Crocodile Dundee provided Australia with a massive tourism boost for years after the film's 1986 release.