Written by Tom Deehan on Mar 7, 2018. Posted in On Location / Production News 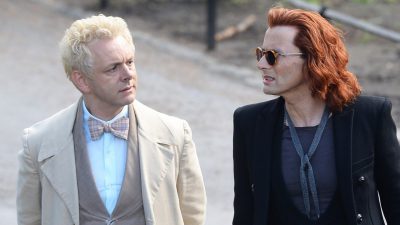 Cape Town has been used as a double for Rome and areas throughout the Middle East. Additional scenes were filmed in Oxfordshire.

The series is a US/UK co-production between Amazon Studios and BBC Studios. Amazon has previously invested in another Gaiman property, American Gods, which has a second season currently in pre-production.

Adapted from Neil Gaiman and Terry Pratchett’s novel of the same name, Good Omens will follow an angel and a demon who try to stop an ensuing apocalypse after becoming accustomed to living on Earth. The series will feature an all-star cast including Michael Sheen, David Tennant, Mark Gatiss and Nick Offerman.

Mark Linsey, Director BBC Studios states: “this is a fantastic achievement that comes as we begin to grow our global customer base, and it demonstrates there is considerable appetite for BBC Studios to make programmes for other broadcasters once we launch as a commercial player. I’m delighted that this major production is with a writer of Neil Gaiman’s stature and we look forward to developing more exciting, innovative projects like this in future.”

Joe Lewis, Head of Comedy and Drama at Amazon Studios adds: “spanning not only the universe but also the entirety of time, Neil Gaiman has created a story that may be the largest ever told on television. We’re excited to be working with BBC Studios to bring Neil and Terry Pratchett’s incredible book to life and to Prime members everywhere.”

Cape Town recently hosted production on the eleventh series of Doctor Who. Producers who film in South Africa can receive a tax rebate of up to 25% to offset their expenditure within the country.