Written by Tom Deehan on Mar 2, 2018. Posted in On Location / Production News

Gordon Buchanan on filming in Finnish Lapland for the BBC

For his recent BBC special, Reindeer Family & Me, filmmaker Gordon Buchanan ventured to Finnish Lapland to capture the local wildlife and indigenous population on film. Reflecting on the production, Buchanan details his experience of filming in one of the world’s coldest locations. 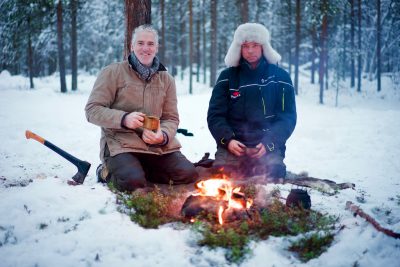 "I’ve worked in the high Arctic several times before, but this was my first visit to such a heavily forested part. I love pine forests and the Arctic, so to combine both was truly magical. I loved it instantly. What blew me away was how wild and unspoilt the habitat seemed to be. Away from the roads, it was hard to find any evidence of people. I love places like that where you can almost imagine that humans don’t exist," explains Buchanan.

"It is easily the wildest part of Europe I’ve worked in, and I think one of the easiest place to make look beautiful on camera. There is a magical quality to the landscape and a real sense of remoteness. Things that are hard to find in the modern world."

The harsh conditions of Finnish Lapland demand additional considerations when filming on location. It is essential that cast and crew are provided with facilities to warm-up in between takes.

Buchanan adds: “keeping my hands and feet warm while spending long periods outdoors was the biggest challenge. To use the fine controls of our cameras, we could only wear thin gloves. My camera is touchscreen, so I had to constantly take off my gloves to change the settings. My feet however had no problem in the cold as soon as I started wearing my reindeer-hide boots. They were incredibly warm, even down at -27°C."

Finnish Lapland is currently hosting production for the international co-production, Arctic Circle. The show will make extensive use of the location over a three-month period.

Finland now provides a 25% cash rebate incentive to offset the cost of filming within the country. The required minimum spend varies between production types but features films, television shows and documentaries are eligible to apply.