Written by Tom Deehan on Mar 23, 2018. Posted in On Location / Production News

London and Birmingham filmed as dystopian America for Ready Player One

To depict the dystopian future of Columbus, Ohio in Ready Player One, director Steven Spielberg utilised locations in London and Birmingham. One of the film's locations is Fountayne Road in Tottenham, which was chosen for having several warehouse buildings that are covered in street art. 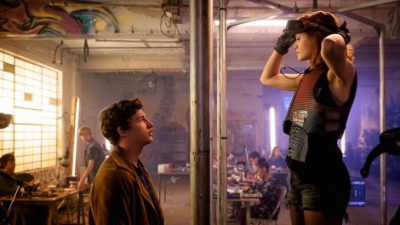 In their search for a safe house for the film’s protagonists, the production settled on an abandoned warehouse in Birmingham which sits just below the Gravely Hill Interchange on the M6 motorway.

Detailing the decision to film in Birmingham, Ali James, the film’s Supervising Location Manager explains: “we went to Birmingham as we wanted streets we could dress and were also not too recognisable as the film is set in Columbus, Ohio. Birmingham being only an hour from Leavesden Studios offered us some great big wide streets, lots of closures and a really helpful film office, and thankfully many areas that are not yet gentrified which was just fantastic. To shoot in an abandoned warehouse and underneath the motorway was great - all locations like that in London would be either impossible to find or difficult to achieve!”

Due to the film’s 2045 setting, locations with a futuristic flare were also required. Holland Park School in West London was used as the stylistic headquarters of the film’s antagonists, IOI, while Sun Park in Camberley was used as the head office of OASIS.

The film’s use of drones sometimes proved tricky, with Ali James adding: “in the movie there are a number of chase sequences involving drones which can be made difficult by local authorities and studio policies. However, with the right lead time, the right operators and companies it was all very possible and we used drones safely adjacent to train lines and in all our sequences on closed roads.”

Ready Player One is an adaption of Ernest Cline’s novel of the same name in which humanity uses a virtual reality programme known as the OASIS to escape the dystopian world of 2045. The film is a large-scale co-production between six different production companies including Amblin Entertainment and De Line Pictures.

By filming in the UK, Ready Player One was able to access the country’s 25% tax rebate incentive – awarded to feature films and high-end television shows that meet a required minimum spend.

Locations in both London and Birmingham were recently combined for a car chase sequence in Matthew Vaughn’s Kingsman: The Golden Circle.