Written by Tom Deehan on Apr 20, 2018. Posted in On Location / Production News

Agnieszka Holland’s next feature film, Gareth Jones, has used the interior of Kraków City Hall and Goetz Palace to double for London’s Russian Embassy and a traditional British gentleman’s club. Principal photography for the project originally began in Ukraine in February, before moving to Poland to film locations including the Zagłębie Palace of Culture and Dietel Palace. 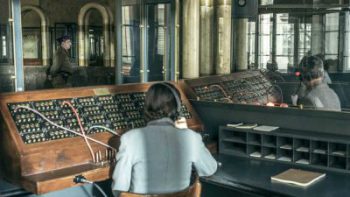 The film is an international co-production between Polish, British and Ukrainian entities, with Stanisław Dziedzic, Klaudia Śmieja and Andrea Serdaru-Barbul producing.

The streets of Wielopole and Zyblikiewicza in Kraków were also used as a double for Moscow. The production is expected to shoot at the Polish National Opera in Warsaw before relocating again to Scotland, with filming scheduled to conclude in June.

Commenting on the project, Producer Stanisław Dziedzic notes: “we are progressing according to the schedule, working in locations which fulfil our artistic expectations. The financial and logistic support which we have received from Małopolska, mainly from Kraków, was very important. The next production stage, in Silesia, is ahead of us, and we hope we will be equally satisfied. I have an impression that filmmakers are still relatively unfamiliar with Silesia, and the region has yet to surprise us in a very positive way.”

Gareth Jones’ story will tackle the Great Famine that afflicted Ukraine in the early 1930s, resulting in the death of 7-10 million people. The production features an international cast including James Norton (McMafia), Vanessa Kirby (The Crown) and Peter Sarsgaard (The Looming Tower).

Poland’s capacity for doubling has been highlighted in several major productions including Steven Spielberg’s Bridge of Spies, which used locations in Wrocław to double for Berlin.

Gareth Jones is scheduled for a 2019 release.