Written by Tom Deehan on Apr 27, 2018. Posted in On Location / Production News 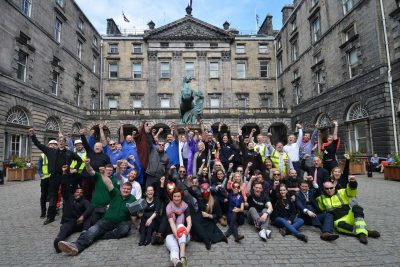 Infinity War marks the first time that Scotland has been featured as a location in the Marvel Cinematic Universe. Speaking with Rosie Ellison, Film Commissioner at Film Edinburgh, she explains: “the filmmakers were looking for something unique, gothic and dramatic and Edinburgh’s Old Town with its medieval architecture fitted the bill. They were also looking for something they hadn’t seen in blockbusters of this scale and while the city is accustomed to filming, with over 350 productions a year, including most recently films like T2 Trainspotting, Avengers: Infinity War is the first production of this huge scale and truly global reach to choose Edinburgh, so it was a very exciting prospect and one that I’m pleased to say the city embraced wholeheartedly.”

The production spent seven weeks filming in Edinburgh, with an estimated local spend of over GBP10 million. 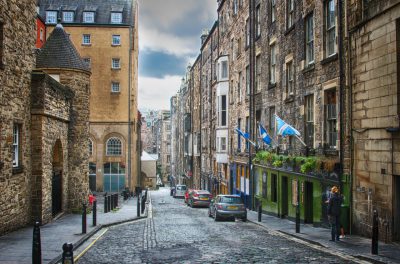 Ellison continues: “filming in the very heart of the city and having to close off parts of the Old Town, extending through Edinburgh’s busy Easter holiday season, was a challenge given the scale of the production. But the decision to shoot exclusively at night-time helped maintain the flow of the city during its busiest times, and the production worked very hard with businesses and accommodation providers to minimise disruption. Of course, filming throughout the night had its own challenges and my biggest fear was noise and light disturbance to local residents night after night, but in fact the production was extraordinarily considerate and surprisingly quiet, and in the end we didn’t get any complaints from residents. I think people were rather excited and curious about what was going on – after all, it’s not every day you get Avengers filming outside your window.” 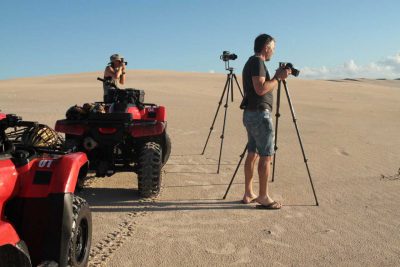 Unique locations were used across numerous countries as inspiration for some of the alien planets that audiences can see in the film. Plate shots of Brazil were used to compose the landscape of Vormir, where Thanos (Josh Brolin) ventures in search of the soul stone.

Victoria Marino of Brazil Production Services details: “the production shot at the Lençois Maranhenses National Park, at several different lagoons. The park was chosen for its unique visuals of clear white sand dunes surrounded by bright blue pools of fresh water. Four days were spent at the location, with three days of shooting and one weather day. We had two units, a ground unit on ATVs and an aerial unit on a helicopter.”

“The most difficult challenge about filming at the Lençois Maranhenses National Park is the fact that this is such a remote location, accessible only by special 4X4 vehicles and about two hours away from the hotel and any nearby town infrastructure. Inside the park, transportation is even harder, made only possible by the use of ATVs. Therefore, a lot of planning had to go into the pre-production to ensure that the shoot could happen smoothly without any complications. 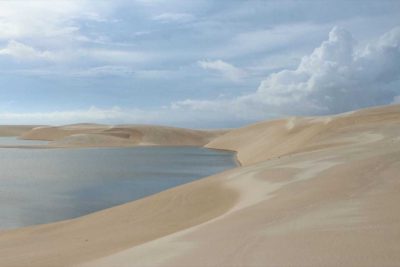 “All of our specialised qualified and bilingual crew members had to come from the bigger cities in Brazil, either Sao Paulo or Rio de Janeiro, and BPS's CEO and Executive Producer Thiago Da Costa was the team leader on the ground, coming all the way from LA to oversee the production. Additionally, specialised equipment and the helicopter had to come from Rio de Janeiro as well. All of the camera equipment was brought from the US. The local support was given in the form of local guides, drivers and equipment loaders/carriers who assisted the crew in getting to the park and moving around in there.”

For the scenes set in New York, the production used a combination of locations in Queens and Downtown Atlanta.

Infinity War is an unprecedented crossover event, bringing together the large cast of heroes across the Marvel Cinematic Universe, including Doctor Strange (Benedict Cumberbatch), Black Panther (Chadwick Boseman) and Spider-Man (Tom Holland). The film has an estimated budget of USD300 million making it one of the most expensive films ever made.

Scotland’s popularity with the production industry has been steadily growing, having recently hosted The BFG and Transformers: The Last Knight. Feature films that spend 10% of their budget within the UK can receive a 25% tax rebate on their expenses.

Georgia and New York also employ their own incentive schemes, providing tax credits of up to 30% and 40% respectively.