Written by Michela Giovinetti on Apr 10, 2018. Posted in Contributors

Michela Giovinetti on hosting Sense8 in the Gulf of Naples

After having worked around Italy as a production manager for more than 10 years, I decided that such stressful life was not for me. In 2003 I moved to Capri, one of the islands in the Gulf of Naples where I usually spent my summer holidays when I was a little girl.

Thanks to the fact that all the places in the Gulf of Naples such as Capri, Sorrento, Positano and Amalfi are famous all over the world for their natural beauty, I could easily continue to do my job of specialising in location management. 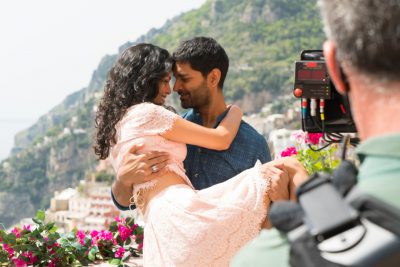 Recently I had the amazing experience of working on the set of Sense8 season two. Filming for the Netflix series took place on location around the globe but the only Italian location that they used was the picturesque seaside town of Positano on the Amalfi coast. I can honestly say that I had never before worked on a production of such huge proportions.

There were 250 crew members including Oscar-winning DOP, John Toll. The camera and lighting equipment alone required 10 trucks! Given that the shoot occurred during the low season and nearly all the hotels were closed, we had to facilitate an unprecedented agreement to get them to open earlier for the production. During this time we truly invaded the village.

Regarding my own work for the project, I spent six months preparing two major locations. The main location was an amazing luxury villa based at the top of the village and since Positano was developed vertically (with a lot of stairs and tight alleys), we enlisted the use of some power barrows and local donkeys in order to carry the equipment around.

We also rented all the houses and the villas around the location to use them as green rooms for the actors, storage and for catering. 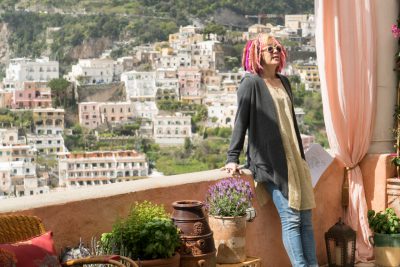 The other location was a disco-restaurant on the rocks. The art department spent months preparing it and on the day of shooting, Director/Executive Producer Lana Wachowski decided that due to the bad light that day, she preferred to shoot the same scene down on the beach. This meant that we had to carry everything out from the location and reset the scenes somewhere else in just a few hours!

While the production was certainly a big challenge, it was a very educational experience for me and Positano is an amazing place for filming. It is worth noting however that the local government has introduced a permit fee for photos as well as for commercial videos (EUR1000/2000) that has to be submitted 30 days before the shooting date.

In spite of this, the people living on the Amalfi coast are very welcoming of production activity but it is important to avoid the high season (mid-June to August) as the Amalfi coast can become very crowded.

Regarding other places in the Gulf of Naples, another beautiful spot is the island of Ischia where I recently went scouting with Ridley Scott for his latest film, All the Money in the World. Being the biggest island of the Gulf of Naples, there aren't as many restrictions concerning mobility and you have the chance to avoid the crowded places even during summertime.

Michela Giovinetti currently works as a Location Manager in Capri but boasts over 10 years of experience within Italy's production industry. For more information about filming in Capri and Positano, please visit: www.caprilocationservice.com.