Written by Tom Deehan on Apr 25, 2018. Posted in On Location / Production News

Despite the film’s title, production for The Guernsey Literary and Potato Peel Pie Society combined locations in London, Bristol and Devon for its 1940s setting. The county of Devon was used to double for the film’s titular island which saw itself under Nazi occupation for the majority of the Second World War. 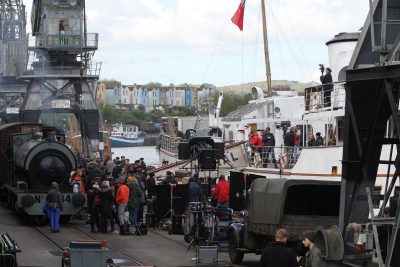 Scenes of Nazi soldiers marching through the streets of Guernsey were actually filmed in the town of Bideford. Over in Bristol, Princes Wharf required little dressing to portray a 1940s harbour.

Producer Paula Mazur explains: “due to the period setting, a very specific look was needed to recreate 1940s Guernsey both during and just after the occupation. Bristol has a fantastic dockside museum, which has been beautifully preserved. It has enabled us to transform the exterior to represent Weymouth Docks in 1946. We're grateful for the support of the Bristol Film Office in helping us bring our scenes here to life.”

Andy King of M Shed, the Wharf’s local museum, adds: “Bristol made a brave and, at the time, controversial decision in the 1990s to conserve Princes Wharf as a working quayside. With the museum’s operational cranes, steam railway and transit shed, it now makes an ideal and animated backdrop for film productions like this, and one that is unique in the UK.”

For the London portion of the shoot, 60 members of cast and crew descended on Sicilian Avenue, and with the help of green-screen effects, transformed the location into a traditional street scene of the era. The House off Detention in Sans Walk was also used as the setting for a jazz party. FilmFixer provided location assistance for these scenes.

The UK provides a 25% tax rebate for feature films that spend at least 10% of their budget in the country. The incentive has attracted major cinematic blockbusters including Ready Player One and the upcoming sequel to Spider-Man: Homecoming.