Written by Tom Deehan on May 16, 2018. Posted in On Location / Production News 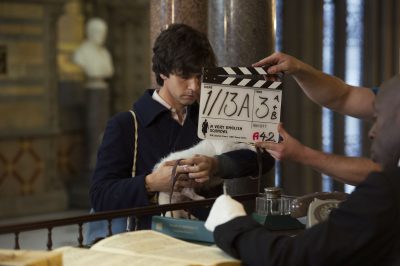 Karen Everett, CEO of FilmFixer explains: “fifty cast and crew were involved in filming the romantic scene, in November of last year, in a hidden corner on the Embankment. A restricted parameter meant the pair were protected from the public, and the paparazzi, for the shoot… the Albert Embankment boasts an iconic London view across the River Thames to the Houses of Parliament.”

The three-part series will tackle the infamous scandal that ended the career of Liberal Party leader Jeremy Thorpe. Written by Russell T Davies and directed by Stephen Frears, A Very English Scandal has been produced by Blueprint Television in conjunction with the BBC and Amazon Prime Video.

Karen adds: “a scene was also shot in Southwark’s St Aidan’s Road in East Dulwich, where a character was filmed speaking into the phone in a telephone box. This also involved 50 cast and crew, and the unit was able to base at Athenlay Football Club nearby.”

Additional scenes were filmed in Hertford’s Fore Street and Castle Street which were used to depict the county of Devon. Interestingly enough, Devon itself was used as a filming location with the production descending upon Saunton Sands last year.

High-end television series that film in the UK can receive a 25% tax rebate upon meeting a minimum spend of GBP1 million per-broadcast hour. Filming is currently underway for another BBC series entitled Gentleman Jack, which will also utilise locations in Copenhagen.

A Very English Scandal will premiere May 20th at 9pm on BBC One.