Written by Tom Deehan on May 3, 2018. Posted in Awards and Festivals / General Interest

straight 8, the global competition dedicated to the art of Super 8mm filmmaking, has unveiled the selection of films to be screened at this year’s event during the Cannes Film Festival. The premiere will take place May 14th, 20:30 at Cinema Olympia. 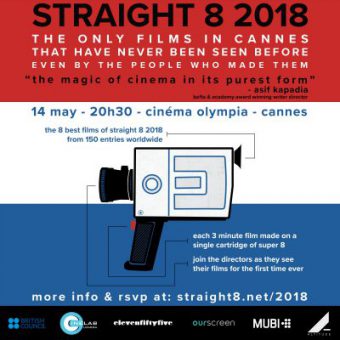 Each contestant has provided a short film on a three minute and 20 second cartridge of Super 8mm cine film which has been shot without retakes, editing or post-production. Similarly, any accompanying soundtracks must be original and submitted without retouching.

The 2018 straight 8 jury is comprised of Asif Kapadia (Director), Justine Wright (Editor) and Hamish Moseley (Head of Distribution at Altitude Film Distribution) with Jason Solomons (Film Critic) as chair of the jury.

Solomons explains: “this is a very rich and varied programme. straight 8 has really gone global and, technically and thematically, the standard goes up a notch every year but this year seems like an even bigger leap. Initially, the films felt limited by the format and rules, but as the filmmakers have gotten used to the restrictions, they have made a virtue of them and now the scope seems limit- less .”

The following eight films will be screened:

Flicker and Fade by The Kommandants (Darwin, Australia. Filmed in Cambodia)

What A Drag by Jake Kuhn (Atlanta, USA)

Winter Of My Life by Roger & Remy Batteault (Beaune, France)