Written by Tom Deehan on May 24, 2018. Posted in On Location / Production News

The currently untitled project from Director Danny Boyle and Screenwriter Richard Curtis is now filming on location in the English town of Halesworth, Suffolk. The final stage of production will involve hosting a major concert set on Gorleston Beach with at least 5,000 extras in attendance. 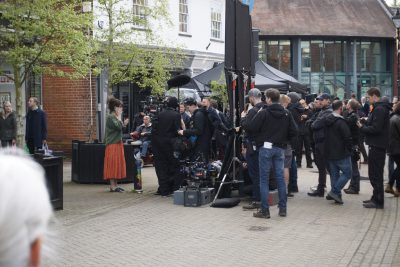 The project, which is rumoured to be titled All You Need is Love, is being produced by Working Title Films and will be distributed worldwide by Universal Pictures.

During an interview with Screen Suffolk, Curtis explained: “once you arrive here you’re in a kind of simple, beautiful, easily controllable environment. Everybody’s happy out here. They’re all enjoying themselves and they don’t go off to their wild lives and all the distractions.”

Screen Suffolk CEO, Karen Everett adds: “as we strive to develop Suffolk’s reputation among location managers and to put the county firmly on the global map for filming, it’s invaluable to have resident goliaths of the business such as Richard Curtis literally putting his money where his mouth is. Richard set the entire the film here in the writing. This production is an extremely important milestone in Suffolk's growth as a film centre.”

Suffolk’s popularity as a filming location has grown steadily in the last few years. The county recently hosted production for season two of Netflix’s The Crown, alongside Benedict Cumberbatch’s family drama, The Child in Time.

Production activity in the UK is incentivised by a government funded tax rebate on eligible local expenditures. Feature films and high-end television series that qualify can receive a tax rebate of up to 25%.