Written by Tom Deehan on May 31, 2018. Posted in On Location / Production News

The production for Deadpool 2, which is already one of the highest grossing films of the year, was shot in a variety of locations throughout Vancouver and the surrounding area. One of the film’s most ambitious set-pieces involved a large prison convoy under siege in downtown Vancouver. 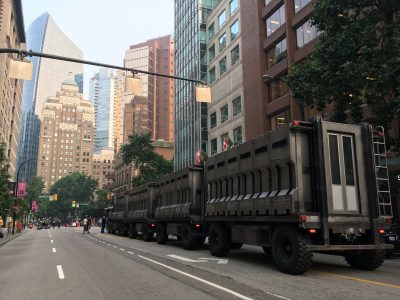 Deadpool 2’s Location Manager, Ann Goobie explains: “a closed mental hospital building was used for the Mutant Orphanage while a decommissioned power plant was used to construct the Ice Box Prison. X-Mansion was at Royal Roads University’s Hatley Castle in Victoria (same mansion that we used on X-Men: Last Stand) and at Hycroft Mansion in Vancouver. Grouse Mountain was shot for some of the snow sequence as well as plate shots of Rainbow Mountain/Iceberg Lake near Whistler. The convoy journey from the prison was filmed on the Sea to Sky highway north of Whistler and Cypress Bowl Rd as well as the Lions Gate Bridge and the Cambie St. Bridge.”

Stage shoots for Deadpool 2 took place at Mammoth Studios in Burnaby, which amounted to roughly half of the production’s 75 shoot days. An estimated local spend of CAD100 million was accrued throughout production, hiring over 3,700 members of local cast and crew.

Detailing the chase sequence however, Goobie adds: “for eight days over the course of three weekends, we closed off five blocks of two downtown streets when filming this scene for public and crew safety. The closure required 43 police officers and 98 Production Assistants and was the largest closure for a film production that the City of Vancouver has ever allowed. Besides the challenge of convincing the City to allow our closure, our other challenge was if the police could come up with enough bodies to close the streets and also finding 98 Production Assistants that could lock up pedestrian traffic.” 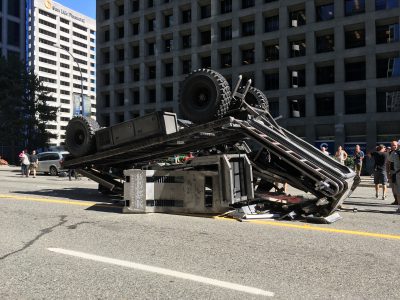 “Once we had secured our personnel for the closure we had to come up with an effective communication plan as we did not have everyone on the radio to confirm the lock-up. We split all of the blocks into sections with team leaders and had every PA wear a florescent neon yellow hat that they waved to confirm for the team leaders that their section was locked. The movement of the convoy truck was a undertaking in itself as it was 110ft long and 10ft wide and had to maneuver in narrow streets. It required eight motorcycle cops to bring the truck back to its starting position after every take.”

British Columbia is no stranger to hosting high-budget productions. War for the Planet of the Apes incurred a local spend of USD81 million after filming in Vancouver, Tofino and Ucluelet.

Productions filming in British Columbia can receive a tax credit of 28%, with the understanding that a required minimum spend is met. A 16% tax credit can also be accessed for post-production work.