Written by Roland Quesnel on May 2, 2018. Posted in Contributors

In the shadow of Picasso - the renaissance of Málaga

Spain has long been a prime destination for filmmakers looking for great locations. The usual suspects stealing the glory are, as ever, the deserts of Almeria and the charms and heritage of Sevilla. But there is another Spanish city starting to elbow its way into the company of the big boys. In recent years, the provincial port town of Málaga has undergone an astounding renaissance commercially and culturally, and this is reflected in its increasing importance as a location destination. Much of the impetus for this has been generated and helped in no small part by the legacy of Málaga's most famous son: Pablo Picasso. 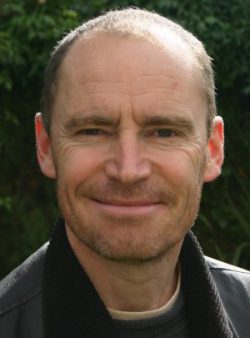 The agreement between the town hall and the Picasso foundation saw a grant of 233 art works given to the city, to be housed in a purpose-built museum which opened in 2003. The presence of this museum and its cache put Málaga on the map culturally, gaining it an international visibility that it had never experienced and visitor numbers increased dramatically. Through much public investment, there are many more museums and attractions, the harbour front has been completely revamped, and the cruise ships roll in and out. Málaga is enjoying a boom and is unrecognisable from the slightly shabby provincial port town of twenty years ago, by-passed by the millions heading for the Costas. Now, Málaga city is the main attraction.

One aspect of the investment of cultural infrastructure was the establishment of the dedicated Málaga Film Office, which has full time staff and a remit to be a one-stop shop for enabling filming in the city. Sevilla has a similar set-up, while most other towns and cities in the region place this responsibility with their tourist offices. Málaga's film office has dedicated staff and streamlined bureaucracy to make filming in the city a positive experience and free from hassles. The latest and one of the largest productions seen in the city featured Málaga's second most famous son, Antonio Banderas, playing its first famous son, Pablo Picasso in the landmark National Geographic production, Genius season two, which premiered on April 24th 2018. This used several iconic locations in the old quarter of the city where Banderas himself has recently returned to reside, with a stylish penthouse in the old quarter, full of cinema memorabilia and iconic art objects reflecting Málaga and its character. 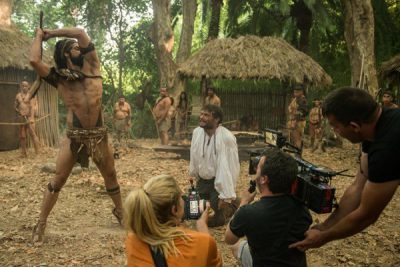 Málaga has recently made available several old ecclesiastical buildings as locations. There is a wide variety of such architecture encompassing several centuries and styles. Large areas of the centre are verdant, resplendent with sub-tropical vegetation and the city centre is almost completely pedestrianised. It has a Moorish palace and fort, monasteries and convents, churches with gothic macabre crypts and many splendid old eighteenth and nineteenth century palazzo style houses. This offers a wealth of locations, and not just for filming drama. The film office reports that 2017 saw an increase in productions, with 202 separate shoots authorised and assisted. 145 of these productions were domestic so over 50 international productions were hosted in the city.

Every year sees a plethora of short film activity, many by local filmmakers. Over 30 TV shows used the city as a backdrop as well. These include drama series, feature film segments, commercials, stills shoots and a variety of documentaries, as well as corporate video and music videos. All of these productions benefit from the direct support of the film office who liaise directly with municipal services, local police and other departments to streamline permitting of and access to locations, no mean feat in a city with a largely medieval town plan in its old centre. 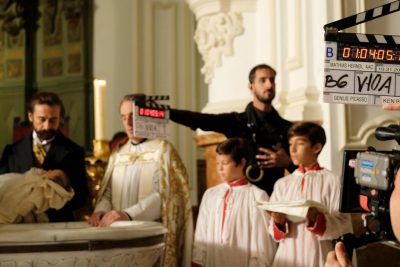 One of the greatest location assets of the city is ironically not urban at all. Just on the edge of the city are the botanic gardens of the Finca de la Concepción. Largely put together over 150 years ago and directly inspired by English Enlightenment gardens, it is a verdant time-warp of sub-tropical splendour. So lush is it, that it has doubled as a tropical rainforest many times for commercial spots and TV dramas. A jungle with modern urban access and conveniences! Other assets are the ease of transport links, with economic flight available to all of Europe and even direct flights to the US. Motorway links to other iconic Andalusian cities are excellent, and there are hundreds of kilometres of coastline in either direction as well.

While historically Almeria saw a great deal of filming, the technicians and production staff that crewed the films did not put down roots. Paradoxically, the commercials industry has a created resident bank of talent in Málaga and along the Costa. This process started in the 1970s and the late 1990s saw literally dozens of service companies working to attract productions from all over Europe, the US and Japan. While business has contracted over the cyclical economic crises, the production talent has stayed and it is remarkably easy to find virtually all of your main production and technical talent locally, something that only Madrid and Barcelona can boast otherwise.

Málaga's full potential as a filming location is slowly being realised, and will no doubt continue to develop as the Film Office and the Málaga Film Festival are now established features of the city's media environment. It has a lot more to offer still and its main asset, the weather, will always be there regardless of the commercial and cultural winds. Málaga has a bright future in many ways.

Roland Quesnel is a freelance fixer based in Málaga and the founder of Film it in Spain. To get in contact with Roland, click here.