Written by Tom Deehan on May 18, 2018. Posted in On Location / Production News

Belgrade, Serbia was chosen to host the latest commercial from FOGG which sees a large-scale Bollywood dance number erupt on the city’s streets. Produced by Good Morning Films and serviced by Family Film, the commercial spent two days filming throughout Belgrade’s Old Town. 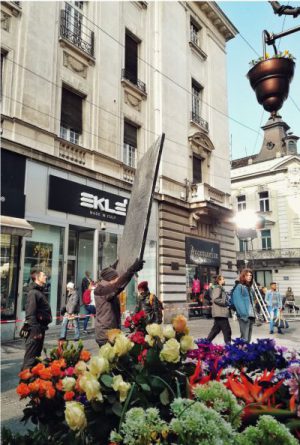 Georgiana Doman, Head of Family Film’s Belgrade office details: “our shoot days were spent in some of Belgrade’s most popular locations including Knez Mihailova (the main pedestrian street), the Kalemegdan tram which goes around the beautiful Belgrade fortress, and Vuk Train/Metro Station - the most beautiful train station in the city.”

She continues: “we had around 80 crew members for the spot, alongside four principal actors, 20 featured extras (ballerinas, football players, cheerleaders, etc.) and 150 extras. The production required a huge base-camp with tents on set for the director, agency and client, make-up trailers and mobile-homes for the main cast. On the technical side we had three cherrypickers, each with 3x18kw ARRISUN on them.”

The Serbian Government recently expanded its film incentive programme, increasing the cash rebate from 20% to 25% and doubling its annual fund to EUR6.7 million. As one of the few countries in Eastern Europe that provides a dedicated production incentive, which also extends to commercials, Serbia is one of the most cost-effective filming locations in the region.

FOGG from Family Film on Vimeo.