Written by Tom Deehan on Jun 5, 2018. Posted in On Location / Production News

Solo: A Star Wars Story filmed locations in Spain, Italy and the UK for intergalactic adventure

The latest spin-off in the Star Wars franchise, Solo: A Star Wars Story, utilised a combination of locations in the Canary Islands, the Dolomites and an extensive shoot at Pinewood Studios UK to create the futuristic world inhabited by its titular character. 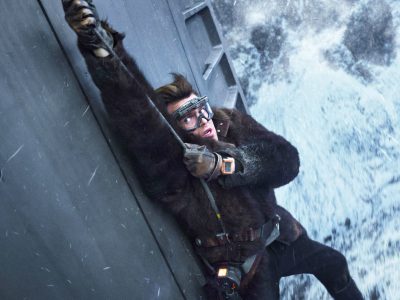 The film’s opening scene sees Han Solo (Alden Ehrenreich) and Qi’ra (Emilia Clarke) in a high-speed chase on the planet Corellia, filmed on location in the abandoned Fawley Power Station. Found in the English county of Hampshire, Fawley Power Station boasts a brutalist design and a spaceship-style control building.

A later scene features a futuristic take on the classic train heist sequence, as a locomotive weaves between snow peaked mountains. While the scene invokes the same imagery of an Icelandic wilderness, it was actually filmed in the Dolomites.

Marco Valerio Pugini of Panorama Films explains: “the main unit filmed for only six days but they were preceded by several VFX and aerial plates as well as a long pre-production period. We worked nearly nine months on the project. There were both technical and logistical challenges, as the main base was at 2,500 metres and the sets at over 2,800, with unexpected heavy snow in early May! Moving over 250 crew members plus all the technical equipment (we had over 50 mountain guides plus several helicopters) on a narrow mountain path needed good planning.” 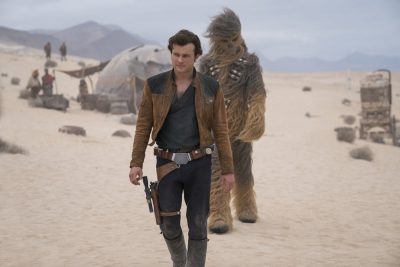 The final portion of filming took place in Fuerteventura, one of the Canary Islands. The production utilised Cañada La Barca over a three-week period to depict the planet Savareen. Fuerteventura has become a particularly popular destination for filming, having recently appeared in Netflix’s Black Mirror.

Solo underwent a notorious production cycle as the film’s original directors, Phil Lord and Christopher Miller, were let go from the project after four and a half months of filming. Ron Howard was subsequently brought on to replace the pair and re-shot roughly 70% of the film.

The UK, Italy and the Canary Islands all offer various financial incentives to attract foreign producers, including a 25% tax rebate, a 25% tax credit and a 35% cash rebate respectively.