Written by Shona Smith on Jul 27, 2018. Posted in General Interest / On Location

Filmed on location on Chapman's Peak Drive, a winding road which trails the western coastline of South Africa, Mercedes-Benz South Africa employs 1988 crash survivor Christopher White to demonstrate the capacity of their new self-driving technology. The 5 minute 39 second documentary-style commercial was shot on the highway where White was found by emergency services in 1988. 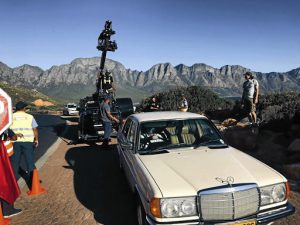 In a spin-off from the 1990 ad which claimed that White had survived the crash because he was in a Mercedez, the new commercial sees White retracing his ill-fated journey while utilizing the new hands-free steering capabilities. South African Agency Net#work BBDO teamed up with production services company 7 Films to shoot the emotive commercial which won an award at Cannes Lions 2018.

Lourens Van Rensburg of 7 Films, who took on the challenge of directing the ad, noted that they faced some challenges because of the location. “Our greatest challenge was trying to close off Chapman’s Peak Drive. Thirty years ago when the first commercial was made, you were able to lock off Chapman’s Peak easily… We had a rolling lock off which meant we had to keep moving and we couldn’t stop. That made it quite challenging having other cars on the road”. Furthermore, because of these restrictions the team had to adhere to safety parameters and obey local driving regulations which would not have been the case on a closed set. 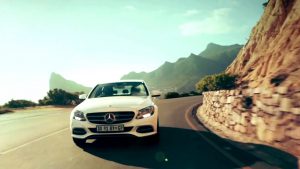 However, while these circumstances increased the time pressure and reduced the shoots flexibility, Rensburg emphasises the fact that “The Parks Board were incredibly helpful”.

While at present there are no incentives in place for commercials to shoot in South Africa, high-concept commercial productions such as Bang Bang Films for Qatar National Bank, have been drawn to the country because its locations and the competency of local crews.