Pakistani comedy filmed in Poland is a box office hit 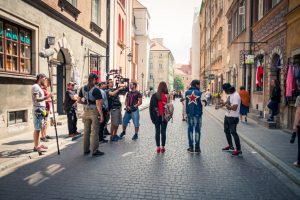 Teefa in Trouble, Ahsan Rahim’s feature-length directorial debut has been met with a warm reception from domestic audiences. The Pakistani gangster comedy follows Anya, a runaway bride who, having been raised in Poland, disavows the traditions of her home country when she attempts to escape her arranged marriage. Anya’s would-be father-in-law employs Teefa to travel from Lahore in pursuit of the intrepid bride to be.

Much of the film takes place in Poland and was a truly inter-continental affair. The two well-known Pakistani leads, Ali Zafar and Maya Ali, worked alongside a 70 strong Polish-heavy crew and supporting cast. Written and produced by Pakistani based Lightingale Productions, the film was made in cooperation with the Polish Studio AGART whose local production expertise was critical for the 28-day shoot in and around Warsaw.

The production was centred in Warsaw and the surrounding Mazovia region. Locations such as the Grand Theatre, the old FSO factory and the Zegrze Reservoir exhibit the rich historic backdrops which Poland can offer. Dawid Szurmiej the Studio AGART producer says “The action takes place in the city, presenting its most charming nooks and crannies. It turns out that Poland can be an interesting and even exotic place for foreigners”. 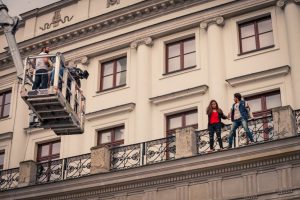 Since its release on July the 25th, Teefa In Trouble has broken the domestic box office record for a local feature released on a non-holiday weekend, ensuring that large audiences are exposed to the charming Polish setting.

Poland has managed to establish a strong tie to Bollywood since its 2012 co-production agreement. In 2014 it was chosen as the location for Kahn’s 2014 film Kick. Now it seems that Bollywood’s most established local competitor, “Lollywood” Pakistan’s production hub based in Karachi, has been tempted to take advantage of the experienced crew and success in producing big-budget feature films set for the South-East Asian market.

Although there are no formal incentive programmes currently operating in Poland, the Polish Film Institute offers up to EUR375,000 for non-European productions. This increases to EUR500,000 for minority productions and EUR1 million for majority productions.