Written by Shona Smith on Aug 22, 2018. Posted in General Interest / On Location 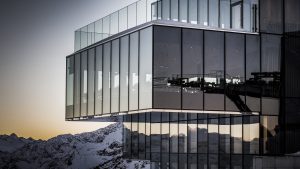 A new Bond themed cinematic installation is located at the top of the same mountain next to the Ice Q and visitors will have to use the cable car to access it, much like the crew who shot the scenes in Spectre. The interior of the klinic was recreated in Pinewood Studios, but all exterior shots for the film were shot on location. The chase sequence involved 18 cars which all had to be towed up the mountainside by snowmobiles due to lack of access.

At the time, Spectre producer Barbara Brocolli commented that “we could not have chosen more scenic or beautiful areas, and we think the sequence shot in the Tirol on Spectre will showcase the region to perfection and provide one of the highlights of our film”. Jakob Falkner from Bergahnen Sölden, who champions the growth of tourism in the region and originally initiated the plans, believes that visitors will want to visit the filming location to dive into the world of 007 for themselves. 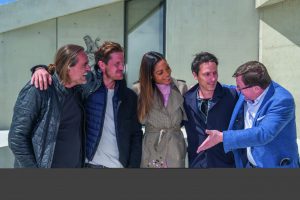 Designing the installation was a collaborative effort between local architect Johann Obermoser, who had designed the Ice Q and Gaislachkogl cable car, Spectre’s art director Neal Callow, who has worked on a number of Bond films, and designer Tino Schaedler of Optimist Inc who has worked on Charlie and the Chocolate Factory and The Golden Compass and describes himself as “an architect learning from Hollywood”.

The team desired to create a project with imposing architecture that would transport visitors inside the world of 007 while also revealing how that world is created. Schaedler says that “Our goal was to fully immerse them in the world of Bond and allow them to be transported for the duration of their visit”. Most of the installation is inside the mountain and rock and ice will be replaced around the edges and on top of the building to truly encapsulate it within the mountain. Only two projected windows will remain displaying the stunning mountain panoramas from the film. 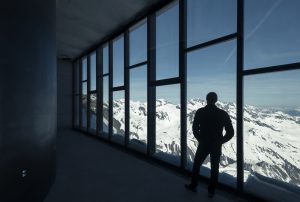 Callow stated that “it was the best project I’ve ever had” because he was able to see his artistic vision taking shape for the exhibition. Oztal Tourism explained that the team wanted to provide a ‘multi-sensory journey, with emotive soundscapes, dramatic programmed lighting, and high-quality visual projections. The structure of the storytelling, the rhythm of the spaces within the building, and the movement between light and shadow were designed to give visitors an experience closer to a movie than a traditional museum.” 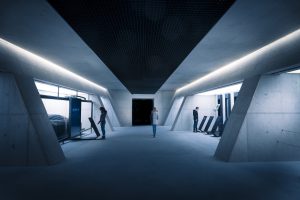 The experience officially opened in July. Naomie Harris, who plays Moneypenny in both Spectre and Skyfall joined Jakob Falkner, managing director of Bergbahnen Sölden, to open the installation to the public.

Cine Tirol is the film commission that supported the production of Spectre in Sölden.

Austria currently has three Film Incentives. The Cine Tirol Production Incentive awards a cash rebate of up to 50% to elected national, foreign and co-productions. Feature films and documentaries and TV Films or Series can qualify and there is a cap of 15,0000 per production. The Film Location Austria FISA  is a film fund open to national and co-productions. 20%of spend is offered to feature films or documentaries set for theatrical release. The minimum spend is EUR1 million and local cast and crew must be used. The Vienna Film Fund  is available national and co-produced feature films and documentaries. There is a financial cap of EUR7,000,00 and local cast and crew must be used.