Written by Shona Smith on Aug 6, 2018. Posted in General Interest / On Location

Disney’s latest release in series of lucrative live-action remakes made use of several filming locations around the UK capital as Winnie the Pooh explores the city.

Southwark was a major base for the production which used the borough to capture poignant scenes as Christopher Robin first encounters Winnie the Pooh, his long-abandoned childhood friend. The production took over Merrick Square for four days filming the Gardens where the magical tree through which Winnie and companions travel between London and the Hundred Acre Wood. Large crowd scenes were also filmed in adjacent Trinity Church Square. Karen Everett, CEO of FilmFixer announced that the production made sure it “spoke to residents in each home and really got to know everyone in the square”. As London’s one stop shop for permits and location assistance, FilmFixer aims to foster good relations with the local communities where large productions take over. 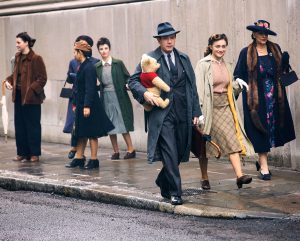 As part of FilmFixer’s commitment to sustainability, training and employment in London, the location service “arranged a set visit for secondary school students, aged 15 and 16, from the nearby Ark Globe Academy”. The visit clearly inspired some students to consider a career in London’s thriving production scene and Josh Mansell from the academy said that the students were “delighted to see that this type of work could be available on their doorstep, so to speak”.

200 cast and crew members were needed to reinvent Camden’s Duke Street as well as Southwark’s Leathermarket and Bermondsey Streets into the hustle-and-bustle of 1950’s London. LIDAR scans were taken here for the animation of the characters. Day and night shoots were conducted with a period double decker bus crossing Lambeth Bridge, and the Old Hornsey Town Hall in Haringey was perfect for the interior scenes as they fit the 1950s appearance of the film. 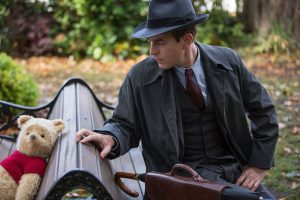 Disney has achieved consistent success with their string of live-action remakes and the new offering is no different having achieved a USD25 million domestic opening weekend. The film is expected to perform greater in the UK, Japan and Australia where Winnie the Pooh are more popular.

London manages to attract international feature-film production due to its competitive and reliable 25% tax rebate which is backed up by the cities well-trained crews and excellent facilities. Although London’s film-friendly locations were undoubtedly a draw for the Disney production, Christopher Robin, it is unlikely that other locations could evoke the sense of British nostalgia that the franchise hinges on.