Written by Shona Smith on Aug 3, 2018. Posted in General Interest / On Location

Last night, Paramount Pictures hosted the Norwegian premiere of Mission Impossible – Fallout at the site of one of the saga’s most impressive stunts yet. Instead of being hosted in a conventionally plush cinema, 2000 dedicated fans hiked for four hours to reach the top of the Preikestolen cliff to watch the newest release with an unparalleled backdrop. 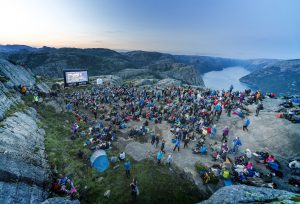 Highlighted in the trailer for the new film, Cruise’s impressive stunt sees him dangling off Norway’s Preikestolen cliff face, otherwise known as Pulpit Rock, 2000 feet above the majestic Lysefjord.

Sigmund Elias Holm from the Western Norway Film Commission notes that “it's a logistically challenging location” with “no road access, and 2000 feet sheer drop to the fjord”. The commission provided support to the production by conducting the initial location survey and feasibility analysis. 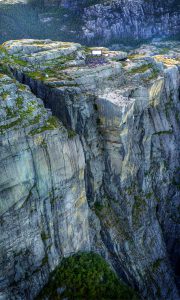 The shoot, which was serviced by Truenorth, spent one week in preparation for the 3-day shoot on the cliff face. The location was closed to tourists throughout and helicopters were able to land on the rock, but production was imposed by the changeable atmosphere.

Preikestolen is one of the most popular attractions for tourists. Holm states that “closing down the mountain for the shoot was a mission impossible of its own”, but the Western Norway Film Commission applied a “solution-oriented approach from all affected parties, from the local municipality of Forsand, the county of Rogaland, the foundation protecting Preikestolen, and others”.

The premiere held on the 3rd August is a testament to the hard work and support that local services provided to Paramount. The local municipality wanted to celebrate the impressive image that the scenes showed of Norway’s landscape. 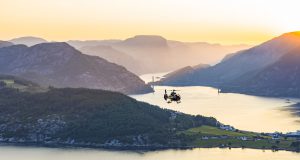 Currently, Norway has a 25% cash rebate available for foreign and co-productions. With no budget cap, nor a criterion in place for the percentage of film that must be shot in the region, Mission Impossible – Fallout undoubtedly took advantage of this incentive.

Film Commission Norway with be returning to FOCUS the meeting place for international production in London on the 4th & 5th of December. Click here to register your interest in the event.

All Photos By Grim Berge